Published in The News International on December 25, 2010:

The Implementation Commission of the 18th Constitutional Amendment is due to present its final recommendations to the Parliament for approval next week. Statements issued in the run up to that have already indicated that subsequent to abolishing the Concurrent Legislative List, a number of subjects, inclusive of health, education, rural development, population planning, social welfare, culture, tourism, youth affairs, etc., will be fully devolved to the provinces and their respective ministries will be abolished. As per the plan, their service delivery functions are to be devolved to provincial departments and their planning functions entrusted to the Planning Commission. Health is meant to be devolved in the third stage of implementation in July 2011.

This decision is part of a long-standing provincial demand and long over-due federal initiative to grant provinces their due share of autonomy. Devolving subjects to the provinces is also part of the drive to cut back establishment costs and reduce fiscal deficit, an objective, the International Monetary Fund has been actively encouraging Pakistan to pursue. In principle, grant of provincial autonomy has the potential to improve governance outcomes and strengthen Pakistan’s federal structure. Devolution of subjects referred to above is a needed step, but this doesn’t mean there is no role for the federal government in these areas. The decision of the Implementation Commission will introduce complex changes with far reaching implications for many sectors—this comment focuses on the health sector and the impact of abolishing Pakistan’s federal Ministry of Health (MoH).

Health has always been a provincial subject under Pakistan’s Constitution, even before the 18th Amendment. However, over time the federal MoH stepped into areas that were provincial prerogatives—in particular, the administrative tangle of controlling six tertiary care hospitals and several donor-supported and federally-led national public health programs. As a result, micromanagement and day-to-day operations overwhelmed MoH’s functionaries and the space for stewardship, normative and oversight functions, a core mandate of any MoH, got crowded out. The decision to recast the MoH in ways that frees it from these responsibilities was long-overdue and therefore to the extent of transferring these responsibilities to the provinces, provincial devolution of health is just the right step. However, this is by no means synonymous with doing away with the Ministry of Health.

Far from scrapping, ‘reconstituting’ and enhancing capacity of Pakistan’s MoH is an imperative. Proponents of the idea of scraping MoH may argue that these capacities can be built at the provincial level. These notions are mistaken for three reasons. One, the costs of doing so would be exorbitant; in fact, fiscal managers’ argument centred on using MoH’s abolition as a way of curtailing expenses would be self-defeating if the costs of creating parallel provincial structures is borne to bear. Second, capacity constraints, which currently prevail in the country, would make it almost impossible to do so. Thirdly, lessons from other countries with federating structures are instructive. Most have MoH and MoH-eqvivalent institutions, e.g., departments of state, which have clear and meaningful missions whilst corresponding institutions at the sub-national level technically have the ‘health mandate’. All countries with federal structures have ministers of health/secretaries of state, which represent them at the World Health Assembly every May in Geneva.

The principle goal of any MoH is to protect and promote the health and well being of its people. On the service delivery side, it is recognized that provinces have the right to organize and restructure the district health system along the principles of decentralization, local self governance and subsidiarity. The provincial mandate should be respected. However, there are a number of changes necessitated in Pakistan’s ailing Mixed Health System to achieve that goal. These entail complex reorganization and reform of existing institutions of service delivery and those that regulate them and provide oversight. This cannot be possible unless there is astute analytical and normative capacity within the system to oversee and guide the process of reform and ensure policy consistency. It would be next to impossible to try and create those capacities at the provincial level in today’s fiscally constrained environment. The federal government’s MoH struggled unsuccessfully with institutionalizing a National Health Policy Unit over a 10 year period with massive donor support; trying to do that in each of the 5 provinces would be an institutional nightmare and fiscally, out-of-the-question. There are other reasons why MOH’s existence and enhanced role are needed. In today’s world, the threat of emerging and re-emerging infections has made disease security a point of convergence for global health. Pakistan has performed abysmally with respect to ensuring compliance with International Health Regulations 2005, a WHO-negotiated global inter-governmental treaty. This was confirmed in the under-reporting of H1N1 last year and evident in many cases previously. Pakistan does not have an integrated disease surveillance system or an apex coordinating arrangement to collect, consolidate and analyse health information. MoH’s role in these areas is a strong rationale for building its capacity further—far from abolishing it.

The complex inter-country dynamics around trade in health—centred on human resource migration, consumption of medical services overseas, commercial presence of a foreign service provider in the country—demand critical institutional oversight. With health services and human resources not featuring as a separate item on Pakistan’s National Trade Policy, there is a risk that the provinces will be left in the lurch with no capacity to deal with these issues if the MOH is abolished.

For whatever it was worth, the latter is an institutional oversight mechanism mandated to deal with this area. A similar concern applies to the growing notion of enterprise development as a means of achieving public goals in health, an area which needs to be carefully regulated.

There are many other areas where central coordination on behalf of the provinces by the Ministry of Health even in the scenario of enhanced provincial autonomy can spare provinces from unnecessary duplicative work for which they neither have human resource capacity nor the institutional arrangements in place. Other than normative functions, economic coordination with donors and bulk procurement of medicine and supplies where cost saving can be achieved, and medicines and human resource regulation fall in this space. Currently most arrangements, the Central Licensing Board, Drug Regulatory Board and the Drug Appellate Board exist at the federal level whilst Quality Control Boards exist at the provincial level. It would be an unnecessary duplication to try and recreate the former category, provincially.

In a nutshell therefore, there are many justifications for the need to reconsider the decision to abolish the Ministry of Health. Having said that, it is also critical that the mission and mandate of MoH is re-casted so that it divests itself from roles that lead it away from its core functions and builds its capacity in normative, analytical, regulatory and oversight tasks. There is need for bridging MoH’s personnel deficit and addressing systemic constraints that plague its functioning. Without attention to strengthening normative capacity alongside provincial and district devolution of health, there is a risk that the current mayhem within Pakistan’s health system will be exacerbated and the ability of the state to deliver health services to its people will be further eroded.

The author is the founding president of the NGO think-tank, Heartfile. E-mail: sania@heartfile.org

December 22, 2010: The Rockefeller Foundation’s partners’ convening meeting, “Overcoming inequities in Asia”, held in Bangkok from December 14-15, 2010 was an opportunity to elicit and present issues, ideas and solutions relevant to the 21st century development challenges facing Asia. President Heartfile attended the meeting and shared the organization’s new approaches and thinking to address the current unprecedented levels of inequality and consequent social disruptions.

December 20, 2010: The third Lancet series on chronic diseases can now be viewed. Heartfile is privileged to have had the opportunity to join the series’ group as a co-author on one of the papers, which was themed on the interface of chronic diseases with health systems. The citation appears Samb B, Desai N, Nishtar S, Mendis S, Bekedam H, Wright A, et.al. Prevention and management of chronic disease: a litmus test for health-systems strengthening in low-income and middle-income countries. The Lancet 2010;376(9754): 1785-97. 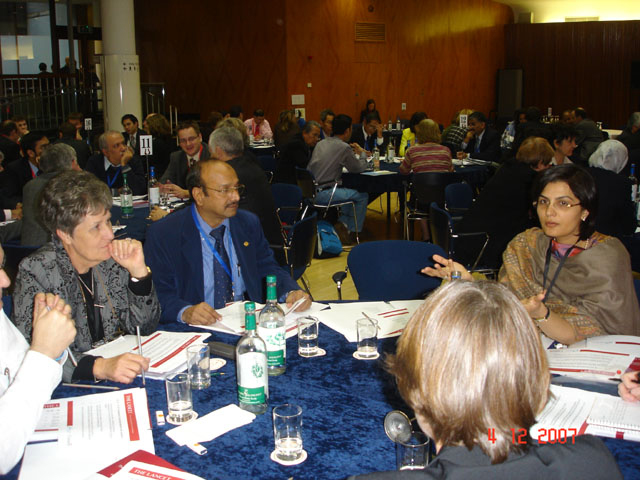 THE LANCET SERIES ON CHRONIC DISEASES