May 31, 2011: The captioned comment raises the point about broader issues of governance in Pakistan, which are impeding progress in general as well as towards health systems goals. The comment gives a message of hope in relation to societal strengths in Pakistan and also raises the point about the need for capacity and will at the State level  to harness the strength of the society.

The events of May 2nd and 21st have left the nation embarrassed and demoralized. The challenges arising as a result thereof may compound Pakistan’s existing problems. Many find it difficult to search for beacons of hope within the myriad of problems at a time like this. Within this context, this comment is an attempt to explore if there is reason for hope, and if so, what is it, that needs to transpire to turn the tide in a positive direction.

Whilst trying to frame an answer to this question, I am reminded of another question I was once asked at an international meeting: “how would you describe the Pakistani society?”

Struggling to portray a positive image of my country, I was fortunately able to quickly recall that a “society” is much broader than the “state” and that whilst the state may be predatory and beholden to capture at various levels, these attributes don’t necessarily describe societal characteristics. A society in any nation state comprises a number of human and institutional actors and relationships and is much broader than those concerning political aspects, which fall within the remit of the state.

The Pakistani society has many positive attributes. With respect to ideological trends, the society falls on the spectrum, with a majority subscribing to moderation as opposed to extremism, desirous of a peaceful, prosperous and progressive role for Pakistan in a globalized world. The Pakistani society has a strong tradition of volunteering and giving—not just rooted in faith but also as part of the sense of social responsibility. This attribute has come into play on several occasions at times of natural calamites, with the 2005 earthquake and more recent 2010 floods, being illustrative. It is also evidenced on an every day basis as the proportion of individual philanthropy supporting public hospitals and schools. The Pakistani societal fabric is woven deeply with family values, as a result of which the Pakistani diasporas remain committed to their roots.

We are the 6th largest country in the world, with a large segment of a population much younger, and potentially useful, than in other parts of the world. The Pakistani society is also a large consumer base, a large market, with a vibrant private sector. Despite the myriad of challenges in the country and the stagnant economy, consumer statistics have an upward trend, indicative of growing demand.

Moreover, there exists within the Pakistani milieu a vibrant civil society, which, subsequent to the lawyers’ movement has discovered its newfound strength. A tradition of activism appears to be burgeoning as a result. The country has a vibrant and free media, which has been proactive in shaping the societal political culture. Another strength of the Pakistani society, ironically, is its resilience. Millions of people survive in harsh economic circumstances; for many, the state exists only in the sense of the fragmented justice and law enforcement system they stumble on every now and then. They subsist without ever knowing what their rights are, and how the state fails them in its obligations.

Whilst these potential societal strengths exist, many challenges lurk. Societal fault lines are emerging with religion, ethnicity and social inequities as their basis and ideological allegiances are fast polarizing. The population ‘dividend’ is becoming increasingly untenable. The burgeoning market is fast becoming a prey to organized cartels and the informal and black economy is increasing in quantum. Vested interests groups are organizing within the civil society. Factions within the media are falling prey to capture. The resilient poor are being pushed to the limit as sluggish growth, compounded by the energy crisis increases unemployment and high inflation assumes a backbreaking magnitude. It is important to recognize that it is weaknesses at the level of the state, which are fast eroding most of the strengths within the society.

The role of a strong state in harnessing societal strengths for improving national outcomes should not be underestimated. The population dividend can hold promise, if it is harnessed with the right vision for a growth strategy, led and implemented by successive responsible governments in an environment of policy consistency. The remarkable societal attribute of giving, supporting and contributing can be amplified if synergies are exploited systemically through legal and fiscal instruments, which incentivize philanthropy both for the indigenous population as well the diasporas and through mechanisms that can demonstrate transparent use of contributions towards national causes. The state can make the market work for equity and quality, harness entrepreneurial talent of the private sector for revitalizing state enterprise, leverage outreach of private providers for public goals, capitalize civil society’s independent spirit and innovative thinking, ride the media wave for strengthening the societal fabric, the list of opportunities can go on.

Most importantly, it is only through an honest, impartial and uncolored hand of the state that the channels of resources, which feed the extremist elements, can be plugged. It is only the state which can checkmate mafia groups, their predatory behaviors, and their inextricable relationship with political party finance. These systemic fault-lines are playing havoc with law and order. In addition to threatening lives they are having a domino effect on the economy and are further deepening inequities in the society, which have a chicken and egg relationship with unrest and violence, perpetuating a vicious cycle.

It is time for a reality check. We must recognize that our failures are largely indigenously manufactured. Rather than blaming external actors, it is best to look inwards for fault-lines that can be cemented.

We must know that our biggest security threat today is lack of economic security and that the country’s most pervasive limitations are technological, knowledge base and human resource capacity related. We must recognize that our lack of integration with the global economic system is a major disadvantage. The biggest threat to the country comes not from outside but from our own short fallings. From our failure to ensure separation of powers between the pillars of the state and institutionalize checks and balances. From our inability to uphold the principles of democracy and the practice of openness and collective deliberations, consensus-building, participation and evidence-based decision-making, critically important attributes in statecraft. From our failure to build safeguards against abuse, collusion and patronage and our ambivalence to the lack of fairness, transparency and accountability within the system.

The solutions to these problems will not come in the shape of “external assistance”. They have to emanate constructively from within us. Leadership, at all levels of society, with a vision for unity, hope and discipline is the need of the hour. In one of my forthcoming comments I will attempt to draw a list of what will help and how each one of us can contribute.

The author is the founding president of the thinktank, Heartfile. sania@heartfile.org

May 17, 2011: We have just launched our facebook page and look forward to interacting with you by soliciting your inputs through our discussion portal as well as through your comments on our news posts.

May 5, 2011. Read our commentary in the Lancet “Pakistan prepares to abolish Ministry of Health”, which has just been published on “Online First”. We are also releasing the final version of the accompanying report, “Health and the 18th Amendment: retaining national functions in devolution” today.

May 5, 2011: Read our recent viewpoint about the challenges and lack of clarity vis-à-vis regulatory prerogatives subsequent to the pronouncement of the 18th constitutional amendment in Pakistan. This ambiguity has implications for health with respect to regulation of human resources, drugs, service delivery and medical education. Click here to read more.

May 5, 2011. Read our commentary in the Lancet “Pakistan prepares to abolish Ministry of Health”, which has just been published on “Online First”. We are also releasing the final version of the accompanying report, “Health and the 18th Amendment: retaining national functions in devolution” today.

May 2, 2011: Heartfile president, Dr. Sania Nishtar attended the First Global Ministerial Conference on Healthy Lifestyles and Non-Communicable Disease Control as a member of the International Steering Committee of the conference. She also synthesized outcomes of sessions both during the closing plenary of the ministerial meeting on the 29th as well as the WHO Global Forum on the 27th. The aim of the conference was to “support member states in developing and strengthening policies and programmes on healthy lifestyles and NCD prevention.” 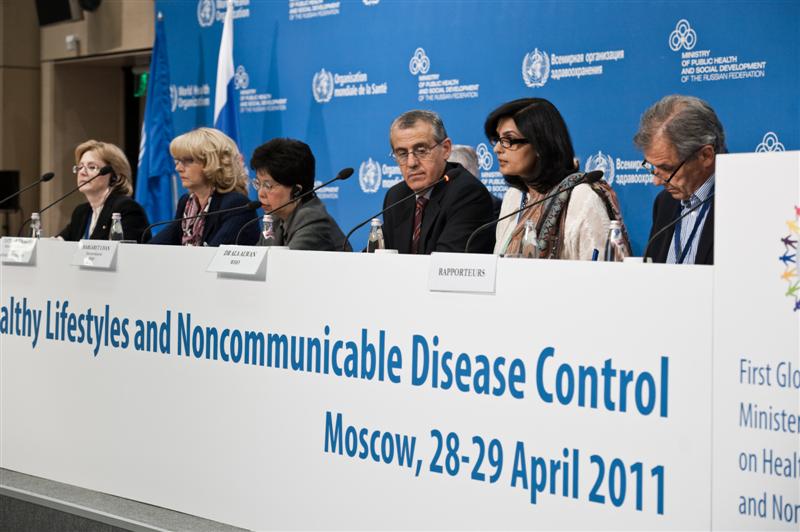