June 29, 2011: The World Bank south Asian HNP multi-sectoral Decentralization Study Group hosted a lunch presentation at the World Bank in Washington on June 15, 2011. Our President Dr. Sania Nishtar presented our recent analysis related to the captioned subject with Pakistan as a setting. Julie Mclaughlin chaired the session and Pablo Gotrett was the discussant. The announcement featuring the background can be viewed and the analytical report can also be downloaded. 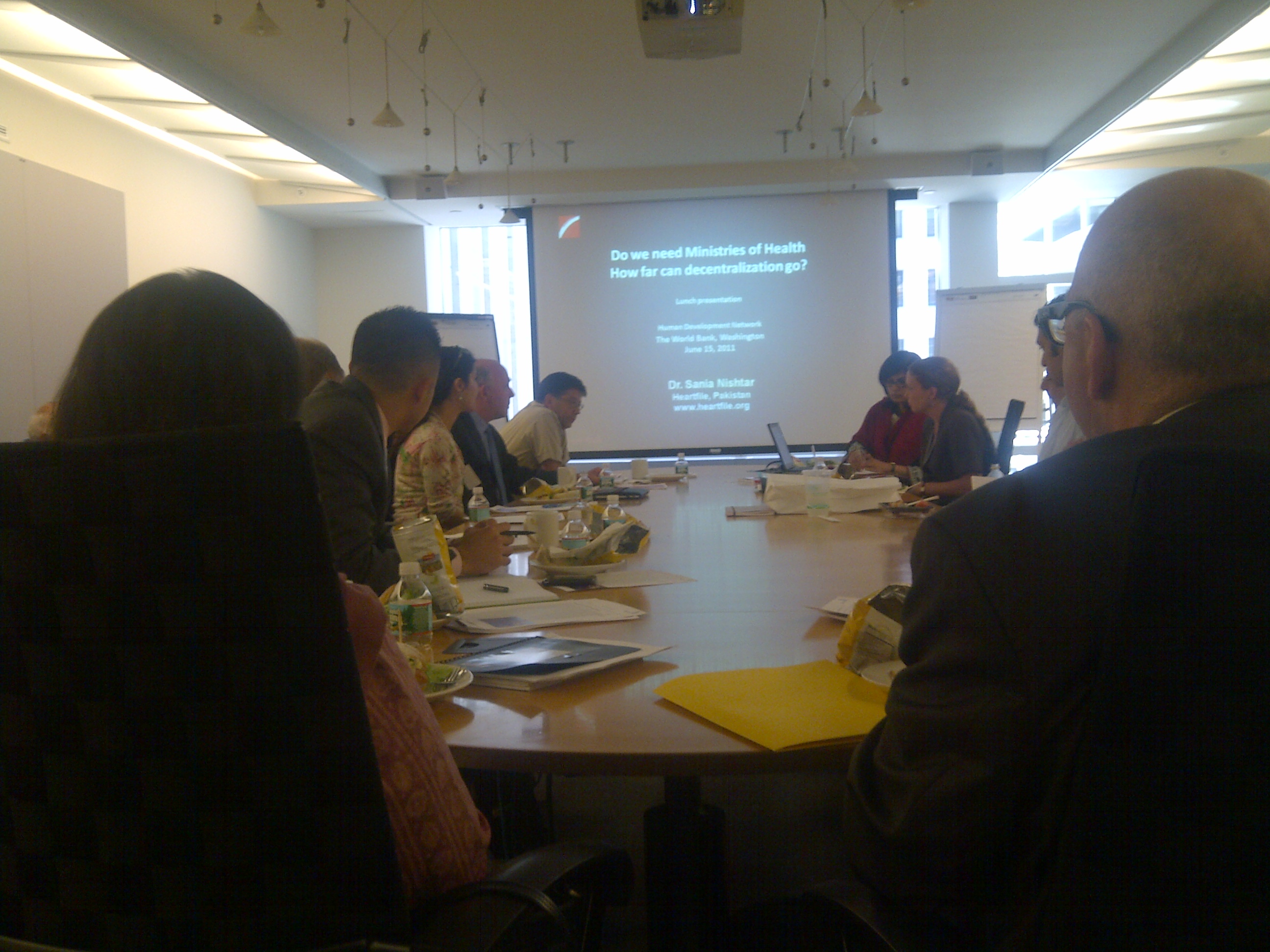 DO WE NEED MINISTRIES OF HEALTH

June 27, 2011: The establishment of a Drug Regulatory Authority is once again on Pakistan’s policy agenda. In principle a step in the right direction, Heartfile examines its implications and suggests some practical recommendations in its recent analysis.

The establishment of a drug regulatory authority is once again on the policy agenda, this time round as part of implementation of the 18th Amendment-relevant devolution of health. In principle this is a step in the right direction. Whilst the service delivery functions of health need to be devolved, it is equally important to recognize that national health functions need to be served federally, as is the case in most federations around the world. In a recent analysis  (http://www.heartfile.org/pdf/HEALTH_18AM_FINAL.pdf) four subjects have been described as falling within the purview of health’s ‘national roles’—information, regulation, international commitments, and several elements of policy. The policy rationale for retaining drug regulation at the national/federal level is robust in keeping with internationally prevailing trends. In addition, independent regulatory institutions are now a prerequisite in the post-WTO scenario since none of the flexibilities under the TRIPS agreement in terms of the rights of member countries can be availed unless there is an independent regulatory authority.

Work in this direction is not starting de novo. The draft “Ordinance to provide for the establishment of [the] Drug Regulatory Agency of Pakistan” (DRAP), a framework the Ministry of Health is supporting, is already on file. However, the situation has changed subsequent to the 18th Amendment and the MoH will have to review its draft law. There is an additional complexity related to the regulatory mandate in this area, which I have discussed in these columns on April 30, in “Mandate to regulate”. The Parliament has the powers to make regulatory agencies under Entry 6 of the Federal Legislative List, but the subject ‘medicines and drugs’ stands devolved. This raises the need for provinces to grant regulatory powers to the federation under Article 144 and 147 of the Constitution. Additionally, although all laws have been saved under 270, the question of the prerogative—parliament vis-à-vis provincial assembly—to amend the drug law loom.

Provinces, with Khyber Pakhtunkhwa (KP) taking a lead, have been reviewing the situation and have developed a position on this. In principle, three provinces are clearly supportive of retaining drug regulation nationally, but have some observations. One, that MoH’s draft law is federal-centric and does not provide for adequate representation of provinces in DRAP’s governance. Two, since the Drug Act 1976 appears as its schedule, it will not be within the purview of provincial assemblies. Three, that DRAP does not provide for a resource sharing formula where some revenue can be retained provincially, which is where manufacturing units reside. KP has proposed an alternative federal/national structure, where a Board with appropriate representation from provinces, overseen by a Council, performs the functions of licensing, pricing and registration. Their alternative draft law also takes into account other concerns mentioned above. The near-consensus to retain drug regulation nationally is positive and the next step should be for all stakeholders to develop a point of convergence. Since the DRAP Ordinance was developed in the pre-18th Amendment era, it is only logical that MoH should review it. With the right leadership a solution can be developed.

However, there are issues beyond DRAP which merit consideration. As work gets underway, there is the risk that attention will disproportionately focus on institutional attributes, which are seen as an end in themselves. It is important to recognize that creation of structures, appointment of members and definition of perks and privileges is not the ultimate desired outcome, just the means to an end. The idea is not just to find a way of mandating a federal agency with the responsibility of regulating drugs, but to achieve certain substantive objectives beyond that. Improvements in quality and elimination of malpractices in the medicines and related products chain is one, so that progress is possible towards the goal of making quality, efficacious and safe drugs affordable and accessible. The other objective is to foster competitiveness and create a level playing field for the industry so that the sector’s contributions towards the economy can be harnessed better.

The DRA can be an institutional vehicle to make headway in these desired directions. But in order for that to happen many things need to be done alongside the creation of DRAP. Three points are being outlined in this respect.

First, the notion of separating policymaking, from regulation/implementation and entrusting regulation to an independent agency is central to the concept of creating regulatory authorities. There are two questions here. The MoH envisages that health’s federal role will be served if a DRAP is created. This cannot be the case, as DRAP should have a regulatory but not a policymaking mandate. The latter will still need to be crafted in the federal purview. Where would such an entity sit when ideas to abolish the Ministry of Health are being mooted? The other question relates to the agency’s independence. Even if the DRAP is established as a statutory autonomous agency, is it likely to be independent? Past experiences with regulatory agencies do not inspire confidence. Members are handpicked and have defined allegiances, controls vest with government and in most cases independent regulatory agencies are just another level of cumbersome hierarchy in the decision-making chain. It is critical to address these concerns.

Secondly, the question of policy norms related to the three levels of regulation—quality, price and Intellectual Property Rights (IPR) regulation—is deeply related to the functioning of DRAP. Currently, the Drug Policy 1997 and Drug Act 1976 are in force, but many weaknesses exist. The drug rules are exploitable, particularly in relation to warranty of drug sale. ‘Nutritional’ and traditional medicines, prescribed by 130,000 practitioners of traditional medicine and devices and related healthcare technologies are outside of the drug act’s purview. Policy norms lag behind in relation to trends in technology, advertising and WTO agreements. There is need for a predictable and transparent pricing policy related to branded and generic medicines. These considerations call for updating norms and eliminating room for manoeuvring.

Thirdly, the value tagged to DRAP can be open to question if certain institutional constraints are not addressed. Elaborate regulatory arrangements exist even today at the federal and provincial levels. The real issue is at the level of capacity and transparency. Inspectors are poorly paid resulting in ‘subsistence corruption’.  The numbers are paltry—250 for a population of 170 million. Drug-testing laboratories are few. Less than 2000 out of the 50,000 retail outlets employ qualified pharmacists while all the universities put together train less than 2000 pharmacists per year. Sale and resale of second-hand machinery is free, raw materials are traded in the open market, tariff collusion is rampant, hospitality-based incentive-intense marketing practices are endemic and back street manufacturing and spurious drugs continue to burgeon.

In order to mitigate these structural issues, a number of considerations will merit careful attention beyond the creation of DRAP. The onus of responsibility lies with the MoH who will have to provide the leadership for the needed transformation. There is no room for vested interest and incompetence here.

The author is the founding president of the NGO think tank, Heartfile. sania@heartfile.org

June 22, 2011: The Lancet NCD Action Group’s recent paper “UN High-Level Meeting on Non-Communicable Diseases” answers four key questions, which need to be addressed if the UN High-Level meeting on NCDs in September, an opportunity to incite a coordinated global effort against NCDs, is to live up to its potential. Led by Robert Beaglehole and Ruth Bonita, the paper is authored by 11 other experts from around the world including our President, Dr. Sania Nishtar. The paper and its accompanying summary can be downloaded.

June 21, 2011: During the recent UN General Assembly Civil society hearing on NCDs, which was held in the run up to the September NCDs summit, Dr. Sania Nishtar led one of the three roundtables and spoke about the need to enhance global cooperation, outlining the stakeholders, mechanisms and modalities. The video of the hearing was split up into two separate parts. You can fast forward to the relevant section of the video at 1 hour, 36 minutes to view her comments. 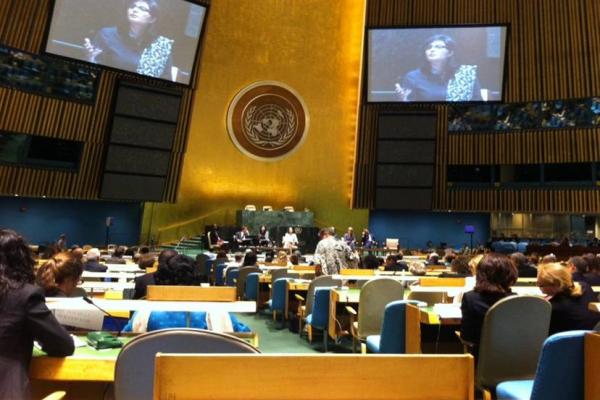 June 9, 2011: The captioned report by the Asia Society Pakistan 2020 Study Group, whose members include a mix of individuals, all of whom are leaders in their own separate fields, is now available for download. The report, written by project director, Hassan Abbas, has insights and intellectual contributions from the group including Dr. Sania Nishtar from Heartfile.

June 06, 2011: Through Heartfile Health Financing, we make assistance available to the poor who cannot afford to pay for healthcare and run the risk of spending catastrophically. Most of the patients we support are the poorest of the poor and we are often confronted with situations where patients need ongoing help beyond healthcare. The case of two patients just supported through our program is illustrative and our summer intern has narrated an account of these cases, which can be viewed here. We are looking for organizations that can help support these patients beyond healthcare and would be grateful if anyone has any ideas in this regard.