April 24, 2015: The Global Philanthropy Forum was held in Washington from April 21-23. Hosted by Jane Wales, the Forum focused on “Disruptors and Decision makers” this year. With a focus on business, philanthropy and government, the forum brought together leaders from all three constituencies to deliberate on solutions to daunting problems at the intersection of public, private and social sector work. Challenges as a result of “broken, and malign, systems” were at the core of the discussion. the session on Non-Communicable diseases centred on innovative approaches to diagnosis and treatment. Sania Nishtar and Rajesh Punjabi from Liberia were the two session experts, who led the discussion in a problem-solving format. 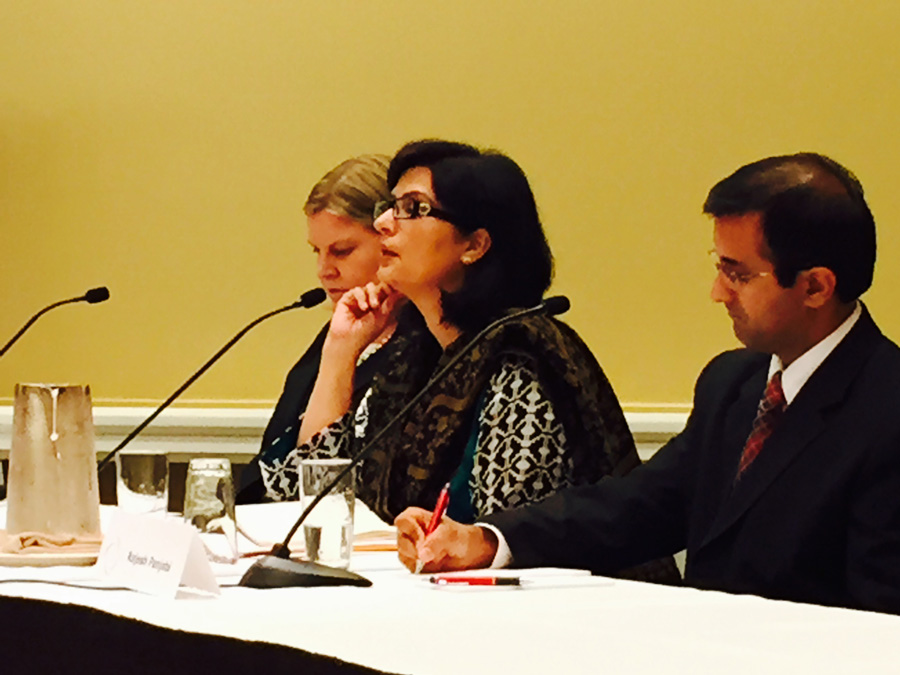 WHO GCM dialogue on NCDs

April 23, 2015: The World Health Organisation hosted the meeting of the Global Coordinating Mechanism on NCDs from April 20-21 in Geneva. The dialogue focused on ways “to encourage the inclusion of the Non-Communicable diseases in development cooperation agendas and initiatives, internationally agreed development goals, economic development polices, sustainable development frameworks and poverty reduction strategies”. Dr. Sania Nishtar was the opening Keynote Speaker at the event and talked about the “Global Burden of NCDs—realising the commitments to include NCDs in development cooperation agendas and initiatives”. 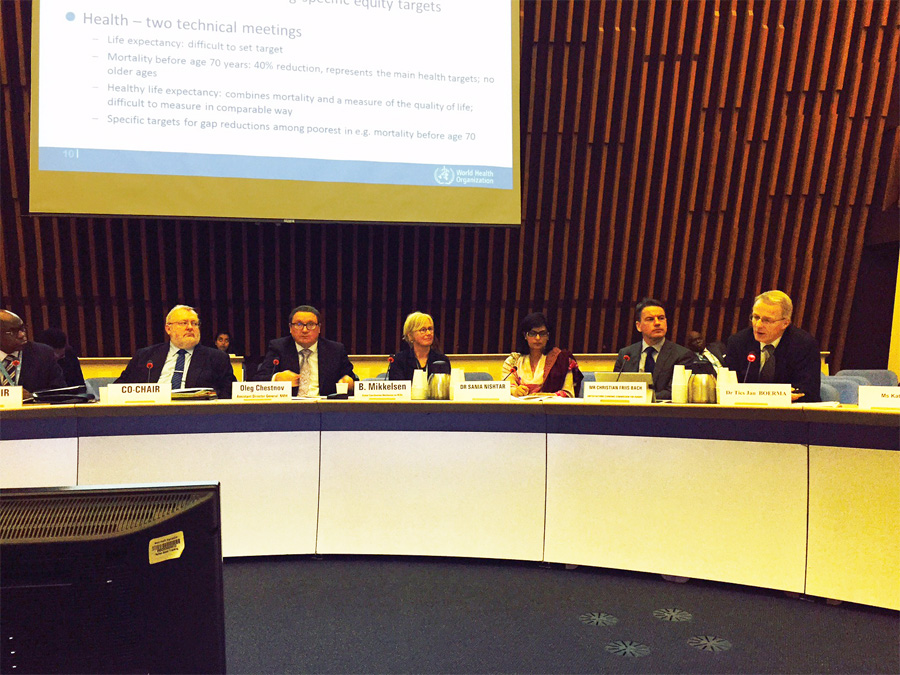 Published in The News International on April 12, 2015:

It has been five years since enactment of the 18th Amendment to the constitution of Pakistan and four years since the end of the term of several committees that were given the mandate to iron out related implementation issues. Despite progress, major issues still lurk that negatively impact performance of the federal and provincial governments. These issues need to be addressed urgently.

Just for clarity, this comment refers only to the provincial autonomy-related covenants of the 18th Amendment and matters arising as a result of abolition of the concurrent legislative list. The comment underscores the need for an institutional arrangement to tackle post-18th Amendment issues, outlining several points.

First, the amendment has created an ‘ambiguity’ in the employment status of thousands of federal functionaries, whose services were either placed with the provinces after abolition of several federal ministries and/or transfer of respective departments from federal to the provincial level or those that were transferred to other federal ministries. These functionaries have been placed in a lower hierarchy and are not entitled to the same benefits anymore.

For the former category, one particular issue is that upon retirement, neither level of government owns them. This has created much disenchantment. Several functionaries have gone into litigation with the government, with the latter ending up spending more than what would take to settle pension dues. The impasse has also stalled hiring in these departments, with work suffering in some critical areas.

Second, it is being inferred that for some to-be-devolved institutions there are no enabling provincial laws. Although Article 270AA saved all federal laws, provinces feel that these need to be formally ‘devolved’ to the provincial level through amendments in the existing (federal) laws before provinces can exercise their ‘devolved’ powers. According to legal experts, this view is neither necessarily consistent with the underlying spirit of the 18th Amendment nor the language and tenor of Article 270AA. An impasse plagues devolution of some important institutions in this regard – for example, the Employees Old Age Benefit Institute and the Workers Welfare Fund.

Recently, the Punjab government has filed a writ petition against the federal government, which is particularly ironic since governments are now resorting to court rather than settling differences in the Council of Common Interest (CCI), which is an important and appropriate constitutional forum for resolution of such matters between the federal and provincial governments.

Third, an ambiguity has arisen regarding the mandate to regulate, especially for devolved subjects, given that Entry 6 of the Federal Legislative List, Part II confers the regulatory jurisdiction to the CCI housed at the federal level. In a recent decision, the Sindh High Court has struck down notifications issued by PSQCA (a federal body established under a federal law) prescribing standards for sugar (an agriculture produce and hence a ‘provincial subject’) on the ground that federal law could not regulate such activity which is a provincial subject. That decision is now under appeal before the Supreme Court, which it is hoped will settle the law on this subject.

Such issues earlier also arose in the context of regulation of medicines. It took the provinces two years to invoke Article 144 of the constitution (a provision which existed all along) but only after the tragic Isotab drug scandal, where more than 120 people died. However, even the constitutional validity of the federal law enacted to establish the Drug Regulatory Authority of Pakistan and its application to all provinces remains uncertain as this aspect is currently under consideration before the Supreme Court. This unnecessary and unproductive regulatory tangle is now the basis of tenuous federal-provincial relationships around higher education.

Confusion about assets and liabilities and their appropriate placement, and federal-provincial disagreements over control of some assets also loom. Furthermore, the lack of focal institutions (except in the health sector) at the federal level has created ambiguities for some donors, especially those that don’t have the capacity to engage with provinces. In any case ‘international treaties, conventions and agreements’ is a federal mandate (Entry 32, Part I of the Federal Legislative List). It is argued that the Economic Affairs Division has been tasked with all international agreements. However, whilst they have capacity to deal with contractual modalities, they are not set up for technical engagement. In the absence of technical focal points, many opportunities of international collaboration are therefore being lost.

Also, it must be recognised that after the 18th Amendment the federal government does not have the constitutional mandate, instruments or the institutions to bring provinces at par. District-wise segregation of any development indicator shows that Balochistan and certain other areas of the country are far more disadvantaged. One of the key roles of the federal government in a federation is to bring provinces at par with each other in order to create harmony.

Unfortunately, the federal government can no longer do that, unless specifically asked by a province, invoking Article 147 of the constitution through a provincial assembly resolution. The potential to innovate in the forthcoming National Finance Commission Award assumes importance in this respect. I will comment on this subsequently in these columns.

Finally, and most importantly, the federal government has a very important role to play in a federation – one that has to do with creating incentives for provinces to remain together in a common economic union. In this regard the evolving and future impact of the 18th Amendment provisions, which now vest ownership of mineral oil and natural gas jointly and equally in the related province and the federal government, need to be carefully studied. This clearly is a matter of national security.

There is an urgent need for an institutional arrangement (task force or committee) with the mandate but also the clout and capacity to flesh out options to address these problems and bring them to the CCI for definitive decisions. Without appropriate homework, merely raising issues at the CCI is not going to help. Without appropriate handling, tensions and ambiguities will continue and whatever positive developments the amendment accrued in relation to galvanising provincial ownership could be thwarted.

The writer is the president of the think tank Heartfile.

April 12, 2015: Five years on, learning from the implementation of the 18th amendment are still needed to guide the reform process. Our recent opinion can be accessed here.

Heartfile at the Third World Network meeting in Malaysia

April 9, 2015: Third World Network (a steering committee member of the Peoples’ Health Movement) organised a workshop in Malaysia, Kuala Lumpur on 6-7th April 2015 on universal health care, anti-microbial resistance and access to medicines. This workshop enabled sharing of information on recent trends and developments, country experiences as well as legal analysis on the above mentioned topics. The aim was to deepen understanding about the issues and discuss policy options in order to enhance civil society advocacy and engagement at the national, regional and international levels. The workshop was attended by civil society organisations from certain Asia Pacific countries, particularly from Malaysia, India, Bangladesh, Pakistan, Sri Lanka, Indonesia and Fiji.  Dr Saba Amjad, Senior Manager at Heartfile presented the Pakistan Case study Showcasing Heartfile Health Financing 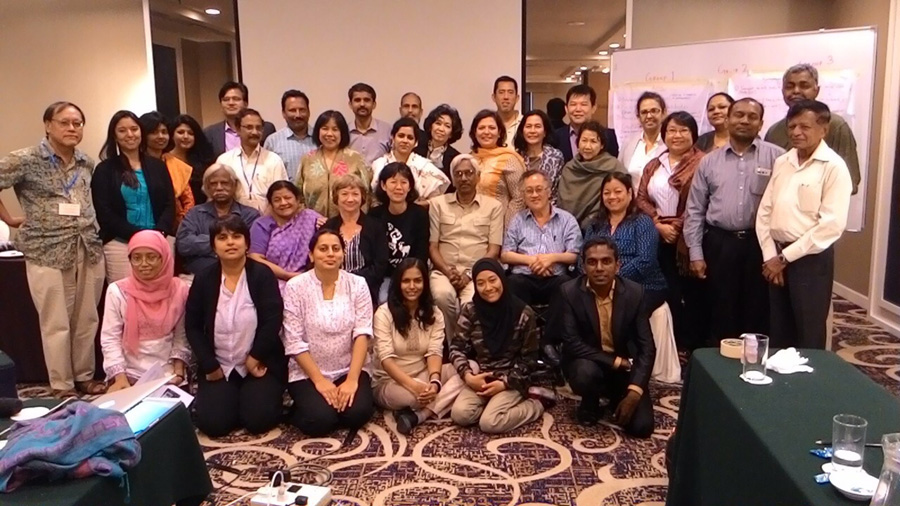