13 June, 2022: Dr. Saba Amjad and Mr. Amjad Javaid, Senior Executives at Heartfile, handed over copies of Heartfile-authored books and other publications to the Vice Chancellor Health Services Academy (HSA), Dr. Shahzad Ali Khan for HSA Library. VC received the consignment, appreciated Heartfile’s gesture, and remarked that these books are frequently needed and asked for by their public health students and consultants. 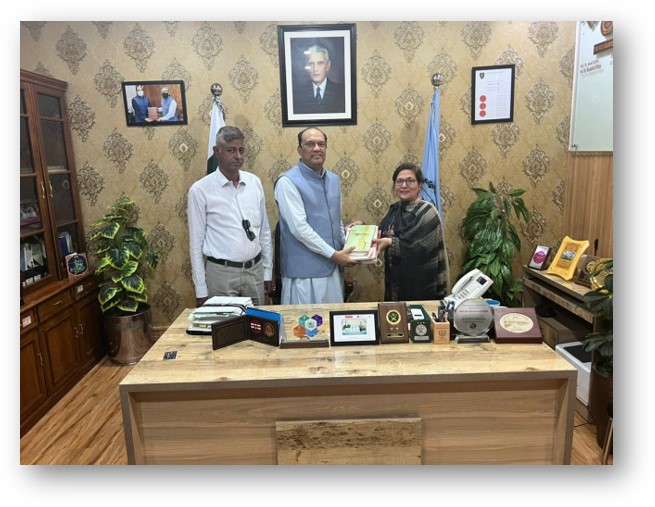 The ill effects of use of Tobacco and cigarettes on human health have long been known and very well understood. They are known to increase the risk of coronary heart diseases, lungs cancer and stroke by a factor of 2 to 4 times and in some cases as far as up to 25 times. The Tobacco Industry (TI) has been the subject of criticism from public health circles and has faced tax raises by Governments and other parallel measures to reduce the demand for Tobacco Products. While all this meant reduced revenues for Tobacco Companies, they were certainly not going to sit back and watch their current and prospective fortunes be eroded away by Tobacco Control efforts. It is worthwhile to note that the combined revenues of the world’s six largest tobacco companies in 2016 were more than USD 346 Billion, 17% larger than the Gross National Income of Pakistan. This puts enormous resources (both material and intellectual) at the disposal of TI to innovate (their products) and/or pre-empt, resist, influence or circumvent regulations and legislations.
Multinational Tobacco Companies continue to expand their market around the world by exploiting existing gaps in their tobacco control policies/legislations to attract new customers while keeping the existing customers tied down to their products.
The newest trick up the sleeve of the industry has manifested itself in the form of Novel Nicotine Products or NNPs. These refer to a broad classification of TI products that only recently emerged during the past few years and have been especially designed to look innocuous, trendy, fashionable and cleverly circumvent legislation/regulation either due to their chemical composition or legal terms and definition. These include products such as Electronic Nicotine Delivery Systems (ENDS), an entire category of Nicotine products like electronic cigarettes, e-cigarettes, vaping devices, or vape pens.
The whole industry’s shift in this direction is noticeable. In 2016, Philip Morris International (PMI) announced that it was committing to a major business transformation — a move away from cigarettes and other combustible tobacco products and toward (supposedly) healthier, smoke-free alternatives to nicotine delivery. The company stated their goal of getting at least 40 more million of its adult customers to stop smoking and switch to one of the alternatives. The company said it shipped 114 billion fewer units of cigarettes and other combustible products and 52 billion more units of its smoke-free products. 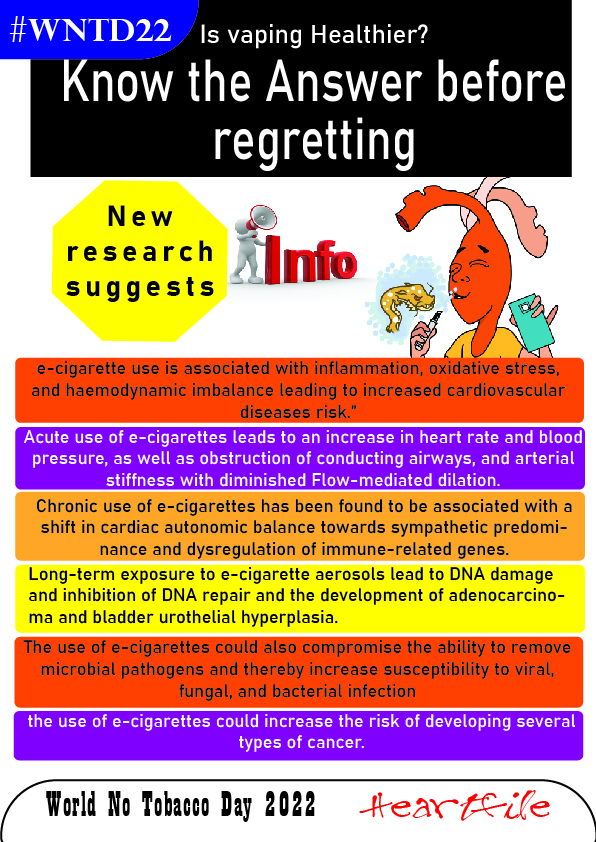 To add to the irony, with the arrival of ENDS, the tobacco Industry has started re-branding itself as part of the solution to the tobacco epidemic. In an interview with Harvard Business Review, Mr Andre Calantzopoulos, the CEO of Philip Morris International (PMI), claimed that

Nicotine is addictive, but it’s not the primary cause of disease….. The problem is combustion. If you can eliminate combustion, then you significantly reduce the harmful chemicals the product emits compared to cigarette smoke.

While still maintaining that the best thing a smoker can do, of course, is to stop nicotine consumption altogether, Mr Andre asserts that the next best thing one can do is to convince a billion smokers around the world who smoke to change their behavior by creating products that they can switch to.
Since their invention back in 2003, over 80,000 patents for different ENDS have been filed in China alone. Taking advantage of the lack of available data and research on the mid to long term health consequences of these products, Tobacco company promoted these products as healthier alternatives to an otherwise unhealthy product. Being (supposedly) safe as well as trendy and fashionable, these products met with great success in the consumer market. Also the products were branded as a cessation aid for smoking.
For long these products were regarded as safe and health alternative to smoking tobacco. However, science has marched and now new evidence has started pouring in. The studies published on PubMed on vapes /vaping have increased by many folds during the last decade.

Physicians for a Smoke-Free Canada (http://smoke-free.ca) has published numerous effects of ENDS on human health and adolescent youth in their recent report. 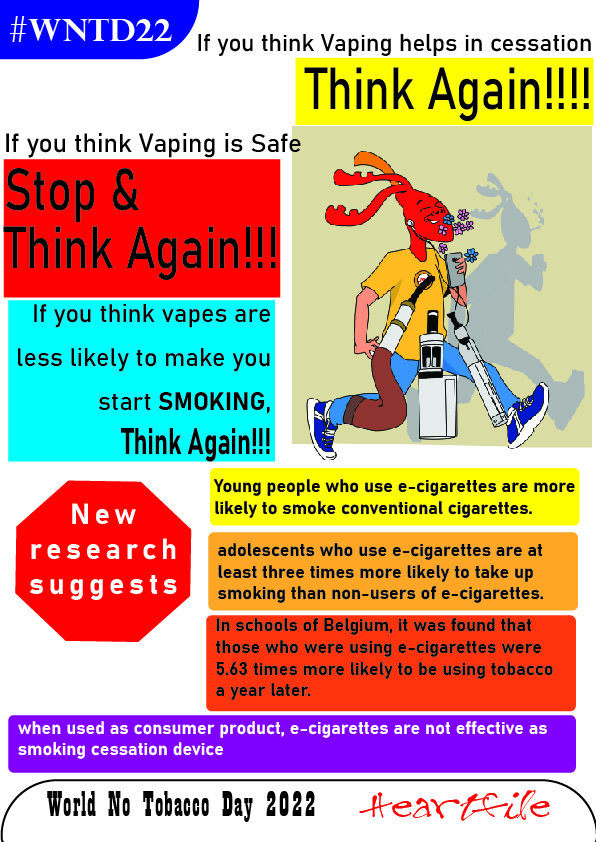 Health effects
There is a general misconception that Vaping is harmless. However, Buchanan and his fellow researchers reported in their January 2020 comprehensive review of cardiovascular effects reported that

the use of e-cigarettes causing multiple adverse health effects. Acute use of e-cigarettes leads to an increase in heart rate and blood pressure, as well as obstruction of conducting airways, and arterial stiffness. Flow-mediated dilation is diminished, transcutaneous oxygen tension is decreased, and a characteristic immune response is activated. Chronic use of e-cigarettes has been found to be associated with a shift in cardiac autonomic balance towards sympathetic predominance and dysregulation of immune-related genes. In animal models, long-term exposure to e-cigarette aerosols lead to DNA damage and inhibition of DNA repair and the development of adenocarcinoma and bladder urothelial hyperplasia. Lipid-laden macrophages accumulate in the lung, accompanied by extensive changes in lipid metabolism and transport. Taken together, these observations raise the possibility that habitual use of e-cigarettes could cause tissue injury, which could compromise lung function and increase the risk of developing heart disease and stroke. The use of e-cigarettes could also compromise the ability to remove microbial pathogens and thereby increase susceptibility to viral, fungal, and bacterial infection. Data from experimental models also support the notion that the use of e-cigarettes could increase the risk of developing several types of cancer. Nevertheless, it remains to be seen whether long-term use of e-cigarettes is indeed associated with such adverse events in humans.

Studies have also shown that

A recently published review (in early 2022) of the pulmonary effects of long-term e-cigarette use updated the earlier reviews of the respiratory effects of e-cigarettes. It concluded that

“Chronically, these changes are likely to result in irreversible parenchymal lung tissue damage and impaired gas exchange, contributing to chronic lung conditions in long-term vapers.
In a 2022 study, the researchers showed that a wide range of e-cigarettes impaired blood flow in mice (as measured by flow-mediated dilation) in much the same way and to approximately the same degree as combustible cigarettes.

Habitual effects
In addition to their adverse health effects, e-cigarettes are now the main product that is getting kids hooked on nicotine. Any decline in statistics of cigarette smoking among youth in actuality reflects a shift in the nicotine products that the youth are mainly using. Such a statistic does not necessarily indicate a decline in youth initiation of combustible cigarettes. It is just because they are hooking onto Novel Nicotine products (mainly vapes) instead of combustible cigarettes. 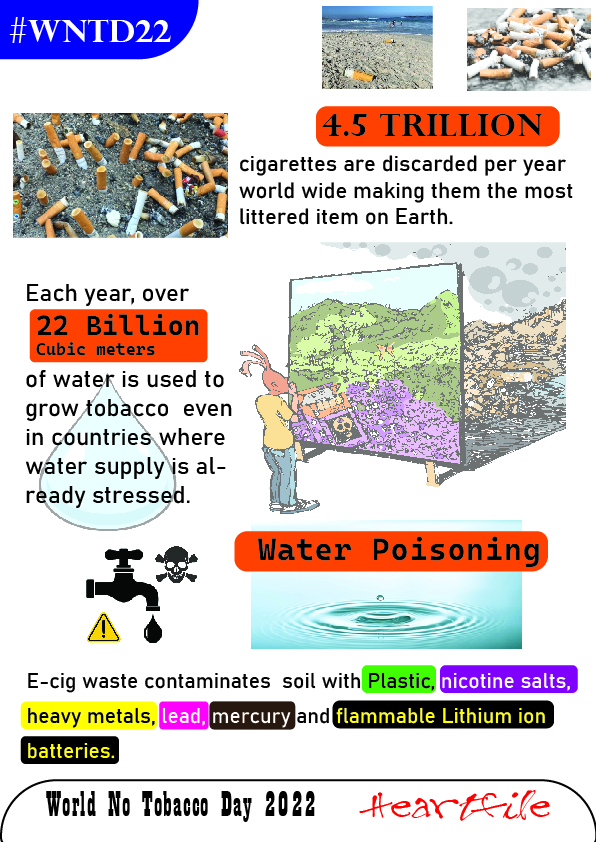 The Novel Nicotine situation in Pakistan is in adolescence. Tobacco Control evangelists strongly advocate that for Pakistan,

Vapes and e-cigarettes have made in roads into Pakistan and can be sparsely found in shops in many cities. Initial data from ongoing surveys indicate they are more likely to be found in high-income neighborhoods of larger cities compared to their lower income counterparts in the same or smaller cities. While their availability across the cities of Pakistan is nowhere near ubiquitous, Tobacco Control advocates in Pakistan see this opportunity to curb their influx.

“None of these products (vapes and e-cigarettes) are manufactured in Pakistan. They are all imports. In a country struggling with Foreign Exchange reserves, why waste precious Forex on a product as useless as e-cigarettes and vapes. I am sure there are better places to spend our Forex on. If I were to be the government, banning import of these items would be my first order of business”
a Tobacco Control advocate talking to the author

The way forward for a country like Pakistan to address the rise of ENDS is straight forward but also littered with obstacles. The author of this blog post is part of a project team which will be working towards landscaping of the NNPs in Pakistan, developing recommendations for policy direction and support the government in developing a policy draft /strategy paper for NNPs in Pakistan. The author can be reached at Ihtiram@Heartfile.org