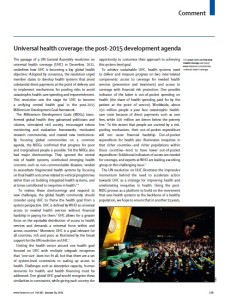 Jeanette Vega, The Rockefeller Foundation’s Managing Director of Health, argued in an article last week for the inclusion of Universal Health Coverage (UHC) in the development agenda, in order to enable health goals to be framed from a system perspective. The article, entitled ‘Universal health coverage: the post-2015 development agenda,’ was published in The Lancet.

WHO defines UHC as universal access to needed health services without financial hardship in paying for them. The need for equitable distribution of access to health services is dire; ‘worldwide, about 150 million people a year face catastrophic healthcare costs because of direct payments such as user fees, while 100 million are driven below the poverty line’ (WHO, 2010).

Jeanette Vega points out that encouraging steps have already been taken towards making UHC a key global health objective. Indeed, in December 2012 the United Nations General Assembly approved a resolution on Universal Health Coverage which ‘urged member states to develop health systems that avoid substantial direct payments at the point of delivery and to implement mechanisms for pooling risks to avoid catastrophic health-care spending and impoverishment.’

However, the author warns that the pressure must be kept up, in order to ensure that UHC can become a ‘unifying central health goal in the post-2015 Millennium Development Goal framework.’ Vega highlights the major shortcomings of the MDGs, which unfortunately ignored the critical role of health systems, as well as neglecting increasingly problematic health concerns such as NCDs. She says that such shortcomings can be redressed by the health community through the adoption of UHC, a ‘goal relevant for all countries, rich and poor, as illustrated by the broad support for the UN resolution on UHC.’

David de Ferranti, President of Results for Development Institute and involved with the Lancet series on UHC has pointed out that at a time when 3.5 billion people in the world are struggling to escape poverty, it is important for the global community to recognise that moving towards UHC is now a priority.

Jeanette concludes that by  ‘using the post-MDG process as a platform to build on the movement that sees health systems as the backbone of a healthy population, we hope to ensure that in another 15 years all of the world’s people will have access to health at an affordable cost.’