You are here: Home / Global Health / The Global Campaign for the Health MDGs: A revived effort to save the lives of women and children 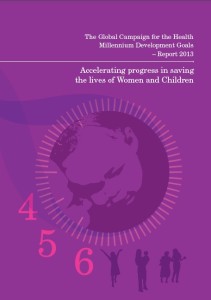 Achieving the Health Millennium Development Goals is an increasingly daunting task, as the 2015 deadline creeps ever closer at a time of an overwhelming strain on the global economy. Whilst significant progress has been made, numerous developing countries continue to lag behind with regard to safeguarding the health of women and children. This is the prevailing sentiment of Progress in saving the Lives of Women and Children, the 2013 report published as part of The Global Campaign for the Health Millennium Development Goals.

Published this week, the report comprises numerous initiatives set forth by global leaders and other key stakeholders, collectively aiming to accelerate progress towards achieving the health MDGs. Since the launch of the campaign in 2007 by the Prime Minister of Norway Jens Stoltenburg, regular reports have been published to reconfirm a collective commitment to the goals of the original Millennium Declaration.

The 2013 report specifically assesses the progress towards Millennium Development Goals 4 (child health) and 5 (maternal health), in an effort to answer the crucial underlying question: although significant progress has been made, why do infant and maternal mortality rates persist at an unacceptably high rate in a majority of developing nations?

The report features contributions from world leaders of major donor countries and developing nations addressing this very question, as well as statements from regional and inter-parliamentary organisations, U.N. Agencies, civil society organisations. Insights from the Global Burden of Disease Study 2010 are also included.

Specific national initiatives such as Safe Motherhood in Malawi and Saving One Million Lives in Nigeria are commended throughout the report, and their success is attributed to “strong national political backing at the highest level and clear national priority setting” by Norway’s Prime Minister Jens Stoltenburg and Goodluck Ebele Jonathan, President of Nigeria, in their joint opening remarks. Other opportunities on the international stage also give reason for optimism, such as the 2010 launch of the Secretary General’s Global Strategy for Women’s and Children’s Health, which prompted the commitment of over US $43 billion to improving the health of mothers, newborns and children.

A comprehensive international framework has thus been established, but as U.N. Secretary-General Ban Ki-moon emphasises in his opening remarks, “there is still a tremendous amount of work to do to meet our goal of saving 16 million lives by ‘the year 2015.” This is especially true of sub-Saharan Africa, where no country is expected to achieve both MDG 4 and MDG 5.

A significant proportion of the tremendous challenges which remain also relate to addressing the disparity between the status of MDGs 4 and 5; the former aiming to reduce child mortality by two-thirds between 1990 and 2015, and the latter seeking to reduce deaths among pregnant women and new mothers by 75% in the same timeframe. Significantly slower progress has been made in the realm of maternal health. Moreover, the concentration of high mortality rates in a small number of countries further exemplifies the challenges facing developing nations: in 2011, 80% of maternal deaths occurred in only 23 countries.

Pakistan knows of these challenges only too well. With around 10,000 maternal deaths in the year 2011, the report names Pakistan as one of the top six countries in the world with the highest maternal death rates along with India, Nigeria, Indonesia, Ethiopia and the Democratic Republic of Congo. Reversing this trend will not only require a vocal commitment on the part of the country’s leadership, but also the implementation of concrete strategies to end preventable maternal mortality. Greater investment in the development of the midwifery workforce and increased access to skilled birth attendance at childbirth are but two examples of the strategies required if the trend is to be reversed.

The prevailing sentiment of the report is thus one of both optimism and cause for concern. Although maternal and child mortality rates have declined dramatically over the past two decades, a concerted effort will need to be made in order to reach MDGs 4 and 5 by their three-year deadline. The reinforced commitment of world leaders to the safeguarding the health and lives of women and children is undoubtedly integral to development, and in this way the report in itself represents a positive step forwards. However, the real potential of achieving the goals depends, more than ever, on translating these declarative commitments into comprehensive and sustainable action.