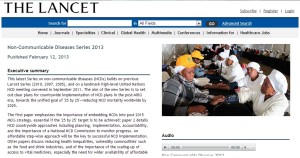 NCDs – including cardiovascular disease, chronic respiratory disease, cancer and diabetes – are today one of the main killers and causes of disability, not only in the developed world, but increasingly in low and middle income countries. In Pakistan’s case where over 70 percent of the 180 million population pay for healthcare directly from their pockets, the strain on the state, of the high and rapidly increasing prevalence of NCDs, is extreme – with disastrous and ultimately tragic consequences.

In 2010 NCDs accounted for 65% of deaths worldwide (34.5 million), and the trend is on a steep upward trajectory.  Deaths from these diseases are expected to reach epidemic levels in the near future. By 2030, the figures are estimated to rise to 50 million deaths a year.

So how do we reverse these devastating trends? A question asked by members of the international health community over a decade ago, when the seriousness of the impending crisis became apparent to experts in the field. In the initial stages of its development in the 1990s, Heartfile responded by using innovative approaches of advocacy, leveraging social marketing and the media. This, and other advocacy approaches, enabled Heartfile to convince the Pakistani government of the need for a comprehensive public health programme on NCDs in Pakistan.  Subsequently, a National Action Plan for Prevention and Control of Non-Communicable Diseases and Health Promotion in Pakistan was implemented under a tripartite public-private partnership involving the Ministry of Health, the Government of Pakistan, the World Health Organization and Heartfile.

Other NGOs and health experts around the world campaigned for several years independently, until the NCD community came together in 2009 and pushed for global targets to tackle the global burden of NCDs.

Following the 2011 UN high level meeting on NCDs and adoption of a political Declaration on the Prevention and Control of NCDs, a landmark target was endorsed last year by the WHO to reduce premature death from NCDs by 25% by 2025. Although this marked a major milestone in the battle against NCDs, the success, as is often the case, brought major challenges, not least the non-binding nature of the agreement, with governments unwilling or unable to reach such voluntary targets.

The efforts to tackle NCDs have been sustained, and a group of leading health academics and scientists convened in London this week, at the launch of the Lancet’s latest series on NCDs. The publication builds on previous Lancet Series (2010, 2007, 2005) and aims to ‘set out clear plans for countrywide implementation of NCD plans in the post-MDG era, towards the unified goal of 25 by ‘25’. Through new evidence, on subjects including access to essential medicines, health inequalities and ‘unhealthy commodities’ such as the food and drink industries, a compelling case is presented for the inclusion of NCDs in the post-2015 agenda.

Included in the series are five papers which examine issues ranging from the planning, implementation and accountability of NCD countrywide approaches to the scaling-up of access to vital medicines. A Viewpoint paper entitled “Improving responsiveness of health systems to non-communicable diseases” co-authored by our President and Founder Dr Sania Nishtar, also features in the Series.

Although the international health community is now well on its way to tackling the world’s most serious health epidemic, major barriers stand in its way, as highlighted by Sir George Alleyne’s blog on our forum this week.

Heartfile’s eForum acts as a sound board for issues to be identified and subsequently framed for deeper discussion through Webinars and Heartfile’s policy analysis stream of work. We welcome your views on the subject, including the identification of obstacles faced in the battle against NCDs and suggestions on how to overcome them.