You are here: Home / Heartfile Stories / The Power of the first hour 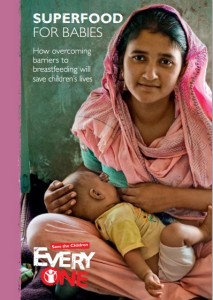 In 2011, 6.9 million children died before they reached their fifth birthday. Perhaps not surprising in itself, until one considers the fact that 22% of newborn deaths could be prevented if breastfeeding started in the first hour after birth. Moreover, 92 million children under six months of age – two out of three babies – are either artificially fed or fed a mixture of breast milk and other foods, and two thirds of these 92 million children live in just 10 countries. These are the latest findings, from Save the Children’s report which was launched this week in Pakistan.

The chief guest at the event was our President and Founder Dr Sania Nishtar who reiterated the fundamental point of the report, “no child deserves to die because they are not getting the right nutrients…if mothers and their families are given information and support to breastfeed their young ones, we can prevent thousands of infants from dying needlessly.”

The report reinforces the importance of breastfeeding, particularly in the first hours and days of a baby’s life, when the mother produces colostrum, a powerful natural immune system booster. The charity states that breastfeeding is ‘a silver bullet in the fight against malnutrition and newborn deaths.’

The knowledge that breastmilk is a superfood is not a new realization; it has been around for centuries. Indeed, in the 1980s, initiatives such as BabyFriendly Hospitals and agreement on the International Code of Marketing of Breast-milk Substitutes were launched. Yet, breastfeeding rates have remained below 40% over the past 20 years. Therefore, the research is a timely effort to bring the issue to the fore, especially considering the huge growth in the baby food market in emerging market countries; globally the baby milk formula business is worth $25 billion.

Pakistan is one such emerging country being targeted by the baby food market industry – a practice made starkly apparent by a survey commissioned by Save the Children Pakistan last year. In a poll of 2,400 mothers and 1,200 health workers, 11% of mothers claimed they had read promotional literature in hospitals or clinics, while a shocking 20% of employees said they had received gifts from companies encouraging them to promote breast-milk substitutes. Both of these practices not only breach the international code but are detrimental to the country, devaluing the benefits of breastfeeding and bringing rates of early initiation down to 29%. According to UNICEF, Pakistan’s initiation rates are among the lowest in the world.

In addition to the big business barrier, the report attributes low rates of breastfeeding to three other main hurdles. The first is community and cultural pressures, issues which are deeply enshrined in the way that societies treat women. Save the Children’s survey in Pakistan found that only 44% of mothers considered themselves the prime decision-maker over how their children were fed (up to six months of age). In addition, inappropriate feeding practices are commonly passed down generations. For example, in many cultures colostrum is discarded, due to ill founded beliefs that it is unclean, or even harmful to the baby, as culture dictates in Niger. The report’s third chapter demonstrates the critical need for women to be empowered to adopt feeding practices that, in many cases, can save their children’s lives.

Other obstacles highlighted in Save the Children’s report include the health worker shortage – a deficit of 3.5 million health workers, resulting in more than 4 in 10 infants being delivered with no skilled assistance. Perhaps equally as disconcerting is the workers’ lack of training in optimal feeding practices, demonstrated by another study in Pakistan revealing that 84% of mothers were advised by health workers to use formula milk for infants under six months of age.

The final barrier to breastfeeding described in the report is maternity legislation. Maternity leave in many countries is still falling well short of the International Labour Organisation’s (ILOs) minimum standards. Even more problematic is the complete lack of protection for the millions of women working in informal employment who remain under pressure to return to work soon after childbirth.

Collectively, such obstacles present a long and difficult path ahead. One-third of child deaths are still attributable to malnutrition – the reduction of which is ‘stubbornly slow.’ Yet there is hope. Last year at the World Health Assembly, member states adopted a global target for at least 50% of children under six months old to be exclusively breastfed by 2025. Rapid and substantial increases in exclusive breastfeeding rates have been observed in certain countries, including Cambodia, Sri Lanka and Ghana. Nations that are falling behind should learn from their experiences. The report offers policy recommendations for governments who must step up efforts to; overcome harmful cultural and community practices whilst empowering young women to make their own decisions; work to make the health system stronger to protect, promote and support breastfeeding; introduce nationwide breastfeeding-friendly policies and legislation; and finally, tighten national regulation to prevent the breast-milk substitute industry wielding such influence over women. If these recommendations are taken seriously and enacted efficiently, thousands of children will be saved.