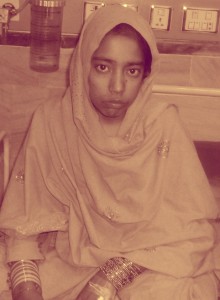 The ill girl is almost inevitably and sympathetically a beautiful girl with a smooth tanned complexion, dark brown eyes, dark brown hair and wearing dozens of bangles.  The hope is that she stays alive to see another autumn.  She was only 16 years old– young with a life that seemed to be full of promise, but ill health had begun to take a heavy toll on her health.  She was diagnosed with tuberculosis (TB) four years ago.

TB has been prevalent in Pakistan and, unfortunately, it has been one of the neglected health areas in the past.  Pakistan ranks sixth in the world amongst the countries with the highest burden of TB.  “According to the World Health Organization, the incidence of sputum positive TB cases in Pakistan is 80/100,000 per year and for all types it is 177/100,000.  TB is responsible for 5.1 per cent of the total national disease burden in Pakistan.  Thus, the impact of TB on socio-economic status is substantial.”And, sadly, it is one of the most preventable diseases that afflict children in poverty.  Tuberculosis is a highly contagious air borne disease.  According to the Centers for Disease Control, “The TB bacteria are released into the air when a person with active TB disease of the lungs or throat coughs, sneezes, speaks or sings.”  It spreads easily and quickly in the lower-income areas where people have generally weakened immune systems.  However, only people with the active TB disease can pass it along to others.  If TB goes untreated, it can be fatal.  Though fewer women than men suffer from TB, women are at a disadvantage since detection and treatment are low priorities for females in Pakistani society.  In addition, women are also more likely to suffer from general poor health and lack of proper nutrition.

Zulikha was underweight and weak, had a persistent cough bringing up bloody sputum, and was unable to sit up for long intervals.  She looked extremely malnourished and anemic.  She had become dependent on her mother to do everything for her.  She and her mother had managed to navigate a weak medical system and had jumped numerous hurdles in order to get some medical care but Zulikha was unable to seek serious treatment until a year ago.  This time she was back at the hospital with one of her lungs collapsed and with the other lung also being infected.  The disease had slowly taken over her body and mind.  She and her mother lived in a state of constant fear and anxiety.  She wondered whether her fate was sealed and whether she was condemned to die.  The incurable cough of death began initially as what she felt was just a cold.

Zulikha lived in urban poverty- in a one rented, dark, unventilated room, without access to clean water or sanitation, which rendered her even more vulnerable to the diseases of poverty.  This lack of basic amenities such as clean water and a proper toilet made her more prone to TB.  Furthermore, her resistance to the disease was reduced by malnutrition. The presence of Zulekha, a TB patient, in the family had entailed major reallocation of time towards her care and the mother had been away from her work.  Thus, it meant reduced family income – pushing the family further into absolute poverty and marginalization.

She had known no better than ill-health and urban poverty with her mother and younger brother.  Her present tragedy was complicated even further as she never got to know her father. He abandoned her mother for another woman and disappeared from their liveswith absolutely no explanation to her.  Zulikha said that it was the most devastating experience and is something she would not be able to forget for the rest of her life.  She added that there was emptiness inside invading her at a time when she needed a father’s support the most.  This was a bond which had been broken forever, unfortunately. The family depended entirely on the mother who became the female head of household and a single parent.  Her mother was left to raise two young children, and played the role of both parents all these years. She had a very difficult time raising the children alone, earning enough money to support them. She was a home based worker who was being exploited by the middle man for the crafts she produced. Thus, Zulekha remained poor, oppressed, illiterate and uninformed, in addition to being anemic and totally unhealthy.

All of these socio-economic factors contributed to ill health and were augmented by poor nutrition, hygiene, poor living conditions as well as lack of medical facilities and medicines. The family lacked a proper diet and the mother mentioned that there was never sufficient food in the house.  It was obvious that malnutrition has had permanent damaging effects on her body and likely on the bodies of her mother and brother as well.

The mother of Zulekha was bearing the primary responsibility for her daughter’s treatment.  Looking through the lens of hunger and poverty, there were numerous areas of discrimination against this female child patient – malnutrition, poor health, educational deprivation, and overwork.   Zulikha was unskilled, and suffered mistreatment by all levels of society.  She was powerless to improve her life, and chronic hunger,  severe and abject poverty added to her desperate situation.  Her mother referred to the social stigma attached to the reality of the disease itself.  She was afraid that neighbours and others would learn of her illness.  The fear was that if people knew her daughter had TB, it would be impossible to find anyone who would marry her. This stigmatization was as frightening as the disease itself and the intangible cost resulted in depression, anxiety and further added to the burden of TB itself.

Our heart went out to this mother and daughter. Heartfile came in to support the financial cost of her procedure but ‘has she been given an expiry date’?  This is a case where the patient could not access timely treatment, and was disheartened by her financial situation.  Perhaps an early detection of the disease and treatment would have saved her from the pain and suffering.  For her, it had now become a challenge for survival. TB has affected her during her most productive period of life and has hampered her ability to break free of poverty.

As Archbishop Desmond Tutu stated: ‘TB is the child of poverty – also its parent and provider.’