You are here: Home / Global Health / The Rise of the South: Human Progress in a Diverse World 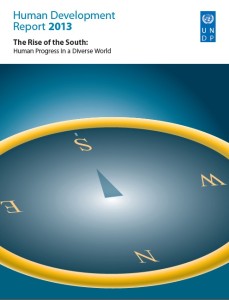 Launched on March 14, 2013, the 2013 Human Development Report titled “The Rise of the South: Human Progress in a Diverse World” highlights a heartening global development. It particularly examines 40 countries, especially the countries that have made a notable progress in the South including India, China and Brazil (in addition to Indonesia, South America and Turkey), an unprecedented advancement which is anticipated to shift the global dynamics significantly in the upcoming years. According to the report, it is expected that by 2050, the combined economies of Brazil, China and India “are projected to account for 40% of world output in purchasing power parity terms.” The “Rise of the South” is also evident in the global convergence towards higher levels of human development as evident in Human Development Index (HDI). HDI is a composite of indicators that measure an economy based on life expectancy, literacy, and income indices. Notable achievements in all HDIs in the South point to a ‘less unequal world’.

The European and the North American economies remain the tsars of development in the monetary sense, however, the rapid scale of development in the South which includes the economic growth, reduced poverty and increased wealth go on to show that pragmatic polices, attention towards human development and rapid globalization can be game changers. The stronger South demands representation of international governance that embodies principles of equity. The strength and the economic take offs of China and India are particularly cited (each with a population of a billion each), both have doubled output per capita in less than 20 years.

The 2013 global Human Development Report was launched in Mexico, which is also an example of these dynamic emerging nations which are expected to have a significant impact on the future economy. At the launch, Helen Clark, the administrator of the United Nations Development Programme  stated that “the development landscape is very different today from when the first Human Development Report was launched 23 years ago.” The profound shift in this changing landscape can be attributed to the different development pathways and political reforms each of these countries have chosen.

Despite these developments, the South remains home to some of the poorest citizens of the world. According to the report, the highest multidimensional Poverty Index (MPI) status is 58% in Bangladesh, 49% in Pakistan and 44% in Nepal. It further states that despite the seemingly larger proportion of population in Bangladesh lives in multidimensional poverty than in Pakistan, “the intensity of deprivation is higher in Pakistan. Moreover, in Bangladesh and Nepal, the living standards dimension contributes more than the health and education dimension, but in Pakistan, the health dimension contributes more than the other two dimensions.”

Moreover the report also highlighted that the average Human Development Index value for South Asia is 0.558, which is the second lowest in the world, just above the Sub-Saharan Africa. Afghanistan achieved the fastest growth (3.9%), followed by Pakistan (1.7%) and India (1.5%).

Although not all developing nations are full participants in this changing global economy, however they have been able to benefit from South-South trade, technology, investment and innovation especially in health. As for instance India is supplying medical equipment to African countries at lower prices. Therefore, it can be foreseen that in order to sustain the growth and development of the South, the important engine for growth, i.e. their domestic market remains which will help them to go much further.