You are here: Home / Pakistan Health / Book launch of Capturing the Demographic Dividend in Pakistan 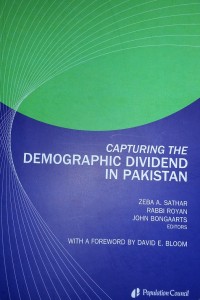 Indeed such population dynamics can and do impede the economic growth of a country. Rise in population is experienced by a country with high mortality and fertility rates. However, effective public health interventions involving medical and health systems’ improvement (focused on maternal and child healthcare) can reduce these rates. This, coupled with higher literacy rates result in societal changes that welcome smaller families. In turn, the share of population of individuals who are dependent on the working age population grows smaller, thus liberating investment and resources essential in economic development and family welfare. When this cohort of productivity is efficiently employed, there rises an opportunity to expedite the economic growth of the country. This window of opportunity is the “demographic dividend”. This hinges upon the country’s employment practices, rise in working-age population’s timing, level of childbearing, women’s empowerment, and policies that make it easier for young parents to work, in addition to other advances. Achieving the crux of demographic dividend depends on the implementation of these policies.

As Pakistan struggles with its rapidly growing population, a crushing burden is posed on the country’s economy. The demographic dividend precursor needs to be catalyzed in this region by wider and deeper interventions involving investments in health, safe water, sanitation, vaccination and drugs. All of these can improve child survival significantly (an essential precursor of demographic dividend).

Unfortunately, in recent years, the population factor and its associated concerns have been adjourned in the development debate and in the mindsets of planners and policy makers in Pakistan. This has caused a stagnation of results, which are evident in the given economic stress of the country. It is in this context, that Dr. Zeba Sattar of Population Council, Rabbi Royan of UNFPA and John Bongaarts of Population Council have jointly authored their book, Capturing the Demographic Dividend in Pakistan which was launched in Islamabad, Pakistan on May 10, 2013.  The book focuses on critical issues of health, employment, youth and gender in Pakistan. The book serves as a blueprint because it suggests ways forward  on the inter-sectoral approach in population and development, given its current status. It is particularly important for policy-makers who focus on education, employment, youth, gender and governance. The book documents the evidence of development linkages seen in the prospective of demographic division as it digs deeper by suggesting solutions.

The book serves as a watershed in the sense that it draws reproductive health issues that had been duct away for a long time. At the book launch, Dr. Rabbi Royan urged that efforts be activated to conduct the population in housing consensus at the soonest. He mentioned that the last population and housing consensus was done in 1998 and the next round of national development will be well served if the current accurate and well analyzed data the new consensus will yield.