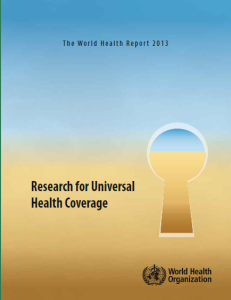 The World Health Organization launched the “World Health Report 2013:  Research for Universal Health Coverage” in Beijing on August 14th, 2013. This report resonates the 2010, World Health Report on “Health Systems Financing: The path to universal coverage”. The interest in universal health coverage has only grown since then as Dr. Margaret Chan, WHO Director General describes it as “the single most powerful concept that public health has to offer”.

In this report, case studies from a number of countries illustrate the importance of local and global research for improving health, ranging from the prevention and control of specific diseases to the better functioning of health systems. The report also noted the substantial health research that is being published as a result of International collaboration. However, it encouraged countries to continue to invest in local research so that a system of universal health coverage can be developed that is tailored to each country’s situation.

Although high income countries dominate the research in this area, research from low- and middle- income countries increases by 5 percent each year which reverberates the global traction towards the idea of universal health access.  The report states “this trend is most visible in emerging economies such as Brazil, China and India, all of which have embraced the concept of universal health coverage”. It showed that in China for instance, based on co-authored research papers by Chinese scientists between the year of 2000 to the year of 2010; the global share of Chinese research has increased from five to 13 per cent.

Emphasizing the essential value of research in this area, the report notes that “research for universal health coverage is not a luxury; rather, it is fundamental to the discovery, development and delivery of interventions that people need to maintain good health. Dr. Christopher Dye, the lead author of the report mentioned that “all nations should be producers as well as consumers of research. The creativity and skill of researchers are the backbone of academic and public health programs.” He also added that “we need to accelerate the process of bringing scientists and decision makers together to improve health service coverage.” Dr. Margaret Chan lauded the importance of the concept by stating “universal coverage is the best way to cement the health gains made during the previous decade, it is a powerful social equalizer and the ultimate expression of fairness.”

Pakistan unfortunately lags behind in this context despite the existence of a state social protection channel called ‘Bait Ul Mal’ as 60 percent of the Pakistani population pay for healthcare from out of pocket today. This is due to a number of reasons including a weak health system, unmotivated workforce, shortage of essential medicines and technologies in Pakistan, which are the basic requisites of a system that strives to achieve universal health coverage.