You are here: Home / Global Health / Levels and Trends in Child Mortality Report 2013 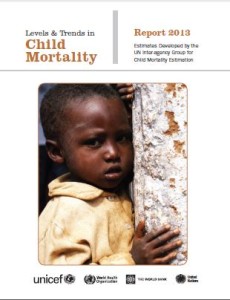 As the deadline for the Millennium Development Goals is fast approaching, the global development organizations are synchronizing their efforts to report their achievements in development. In the context of MDG 4 which pertains to maternal, newborn child healthcare, the global partners, WHO, UNICEF, World Bank Group, and UN-DESA Population Division jointly released the Levels and Trends in Child Mortality Report, 2013 on September 13, 2013. The objective of this report is that these trends will be an indicator of the overall progress made especially towards MDG 4, which will ultimately contribute towards the post-2015 agenda in terms of solutions to common challenges to improving service-delivery for maternal, newborn and child health.

The importance of this has been emphasized by Dr. Margaret Chan, WHO Director-General who stated “Care for mother and baby in the first 24 hours of any child’s life is critical for the health and well being of both”, and she added “Up to half of all newborn deaths occur within the first day.”

A few key emerging facts and figures from the report are highlighted as under:

2.            The report indicated that death in most cases exhibited preventable causes. 45 percent of global under-five deaths are attributable to under-nutrition which is easily preventable.

4.            Despite the remarkable progress achieved in reducing child mortality in the Sub-Saharan African region, it still harbors the highest child mortality rates worldwide, with 98 deaths occurring per 1000 live births. Therefore, a child born in Sub-Saharan Africa faces more than 16 times the risk of dying before his or her fifth birthday than a child born in a high-income country.

6.            Another 34 percent of neonatal deaths, the majority of them preventable, were caused by complications from preterm birth.

8.            Children that die before 28 days of life often suffer from diseases and conditions that are readily preventable or treatable with proven, cost-effective interventions.

Wu Hongbo, the Under-Secretary-General for Economic and Social Affairs at the United Nations supported that while global partnerships work towards accelerating reduction of under five global mortality, “it is critical that national governments and development partners redouble efforts through to the end of 2015 and beyond.”. In a statement, Anthony Lake, Executive Director at UNICEF urged, “…we can do still better. Most of these deaths can be prevented, using simple steps that many countries have already put in place – what we need is a greater sense of urgency.”