You are here: Home / Guest Bloggers / Protection and Promotion of Breastfeeding

Breastfeeding is a free service that a newborn can avail immediately after birth and this is his or her right as well. Said Mr. David Skinner, Country Director, Save the Children, Pakistan at the National Conference on Breastfeeding-A Roadmap for Promotion and Protection, held on October 04, 2013, in Islamabad.  This event was organized under the EVERYONE campaign to bring stakeholders into dialogue and develop consensus on the issues and the way forward for promotion and protection of breastfeeding in the country. Save the Children also launched a research report and a documentary about the breastfeeding situation in Pakistan.

It is for the first time in Pakistan that the Breastfeeding Code violation has been studied and documented in the form of a research report by Save the Children. Dr. Shahzad Khan, Associate Professor at Health Services Academy, Islamabad, provided technical support for this assignment. He pointed out the sluggish momentum of breastfeeding movement that spans from 1981 when Pakistan voted in favour of adopting the International Code of Marketing of Breast-milk Substitutes during the World Health Assembly to 2002 when “The Protection of Breastfeeding and Young Child Nutrition Ordinance 2002” was promulgated to enforce the code and finally in 2009 when the then Ministry of Health devised the rules for protection of breastfeeding act followed by formation of the National Infant Feeding Board in 2010. The pace of progress was further affected by the devolution in 2011 which also surfaced as a promising opportunity for the provinces to take lead in adopting the act as well as formation of respective provincial Infant Feeding Boards. There is still a long way to go with some provinces moving faster than others; however, the growing impetus towards tackling malnutrition in the country would keep a pressure on the provincial governments to ensure they are on right track.

A stark finding of the report was that in majority of the cases, it is the health care provider who advises mothers on use of Breastmilk substitutes. Our data from population based surveys over last decade have also shown a reducing mean duration of breastfeeding against a rising proportion of children who are bottle-fed.  No wonder the Breast Milk Substitute industry worth USD 25 billion today. A prominent speaker at the event was Dr. Tabish Hazir, Head of Children’s Hospital, Pakistan Institute of Medical Sciences, Islamabad. He declared breastfeeding as a license of life for the newborn while presenting eye-opening evidence about the 14 times higher risk of all cause mortality among children who are not breastfed. Dr. Tabish also shared a heartbreaking comparison of data from Pakistan with that of other countries in the neighborhood, having the lowest exclusive breastfeeding rate in entire South Asia. He also shared evidence on significant association of lower exclusive breastfeeding rate with geographic location (urban/rural), wealth index (rich/poor) and mother’s working status. Referring to the estimated cost of scaling up exclusive breastfeeding to a level of 80% coverage from the current 16%, Dr. Tabish referred to the recent Lancet publication reporting the unit cost of PKR 142/-.

Mrs. Maiza Hameed, Member of National Assembly, acknowledged the efforts by development partners in forwarding the cause of child health and nutrition and focusing on an important behavior i.e. breastfeeding. She said that there is a dire need to change our priorities and to ensure that we are passing on a healthy future to our coming generations. There were representatives from provincial departments of health who shared their respective state of affairs with regard to the protection and promotion of breastfeeding. Following the devolution, adoption of the 2002 Breastfeeding Ordinance as a provincial law is deemed a necessity and the Provinces of Punjab and Sindh have already enacted relevant laws. There was a mutual consensus, however, on the significance of this simple no-cost intervention to be prioritized in policy and planning. Maulana Haqqani, a renowned religious scholar referred to various Islamic teachings from the Qura`n and the Hadith where breastfeeding is regarded as a basic right of the child. Maulana recommended developing a model khutba highlighting breastfeeding as an important public health intervention for religious leaders to add into their regular sermons. 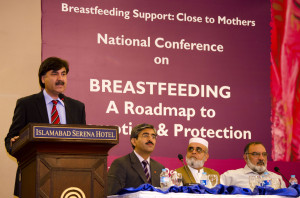 dations and announced that the breastfeeding law will be presented to the parliament in its first session for its enactment. He also assured full support from the Provincial Department of Health in ensuring all relevant steps are taken to protect and promote breastfeeding including a functional Infant Feeding Board. He further mentioned that the Government of Khyber Pakhtunkhwa is taking serious reforms to bring positive change in the lives of mothers and children in the province. Dr. Farah Sadia, the EVERYONE campaign ambassador emphasized that each individual parent should take this responsibility of ensuring exclusive breastfeeding to their child so that  the society as a whole becomes an agent of change. As Nelson Mandela said once that a revelation of a society’s soul is the way it treats its children; it is about time that we join hands and speed up the momentum to improve immediate and exclusive breastfeeding situation in Pakistan.