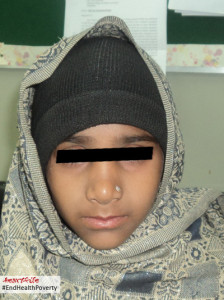 Our senior verifier Farkhanda broke down into tears as she narrated the story to me. I noted that she had been very sad all day yesterday, after having reviewed a child’s funding application. Nine year old SN knew she was suffering from a serious disease, which would be fatal if left untreated. She was the only girl with two other siblings, both boys, in a family ravaged by tuberculosis, poverty and the father’s decade-long bed bound situation. The mother had sold two pedestal fans, the only ‘valuable’ possession she owned, to bring her to Islamabad, Pakistan’s capital city, after months of seeking treatment in the village and nearby smaller towns, which failed to cure her from the condition which made her relentlessly vomit and cough blood and run constant fever, both of which had made her weak and unrecognizable. The hospital in Islamabad was quick to get to a diagnosis—aplastic anaemia, a condition in which the bone marrow, which produces blood cells for vital body functioning malfunction. As such, it is not a cancer, but it is associated with certain cancers, especially those that affect the bone marrow, such as leukaemia. The doctors told the mother that she had to bring the two other siblings over from her village, because they needed to carry out some tests to find out if the tissues of the girl and the brothers matched. In the event of that being the case, the girl could be eligible for bone marrow transplantation, a treatment, in which healthy cells are injected into the patient, offering potential cure. The mother feared the condition would be transferred to the sons and was wary—the child pleaded with her saying, heart-wrenchingly, that this may be her only chance to cure and that the mother should not dither. I can understand why even Farkhanda, so used to reviewing poor patients in need, broke down in this case.

In any civilized country of the world, counsellors would take it from there and explain things to the mother and the family. A reasonably good health system would arrange funding and psychological support for the two kids to be brought over and would automatically do the battery of tests which are needed for tissue matching. When the bone marrow transplantation would be needed, funds would be no problem as the state would manage from one financing window or another. Handling of just this one case is a window to our health systems challenges at all levels.

There are no counsellors and support structures to explain to the bewildered mother why tissue matching is needed and that it will not affect her other—the male—children. The doctors in the outpatients department of the hospital run a massive workload catering to a large catchment population sifting the seriously ill from those with trivial illnesses since there is no referral mechanism. When such a patient is identified, hauling the other siblings from far away villages for tissue matching becomes a nightmare. The cost of travel, food, foregone income when adults accompany children, compounds other challenges. Here we step in to help in a small way when we are alerted to help through our Health Financing program at Heartfile  by sending money through mobile payment systems to faraway villages so that we can ‘pitch a pint in the ocean’ to mitigate enormous suffering. In most cases when a tissue match is finally found, it the enormous cost of the bone marrow transplantation, which becomes an impediment not just in financial access terms but also in terms of service access—paltry and forever depleted social protection funds and only one centre in a country of 200 million offering bone marrow transplantation.

Let us at least recognize the magnitude of the problem and pay tribute to those braving cancers and others serious conditions on World Cancer Day while we continue with our struggle to fight health systems challenges and raise awareness about prevention.