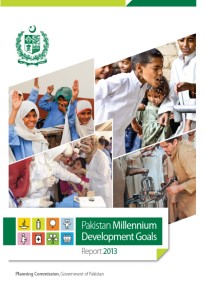 The report monitored 18 MDG indicators over six MDG goals (with the exception of Goal 6, pertaining to combating HIV/AIDS and malaria and Goal 8, pertaining to global partnership for development). The results revealed that Pakistan is off track in meeting targets for several of these indicators (detail can be seen on the given Table. There is a persistent downward trend in poverty and malnutrition in the burgeoning population, there lies a slow economic growth and little prospect of employment of the youth bulge which creates the circle of poverty and illiteracy. Pakistan is therefore unfortunately only likely to achieve one of the eight MDGs, Goal 7 which pertains to ensuring environmental sustainability via water and sanitation.

The sobering report is a wakeup call for Pakistan. While many other countries, including countries within the South Asian Region have made great strides in terms of achieving MDGs, Pakistan is lagging behind in majority of the MDG indicators. There has been little investment in human resource development in Pakistan and therefore there emerges a unique combination of development indicators. Pakistan’s per capita income reveals that it is a middle income country, while the social indicators are that of an under-developed country where is among the ten countries with the least investment in education. There is thus a need for balance and a need to repair the fractured platform of development as Prof. Ahsan Iqbal aptly mentioned during the report launch. 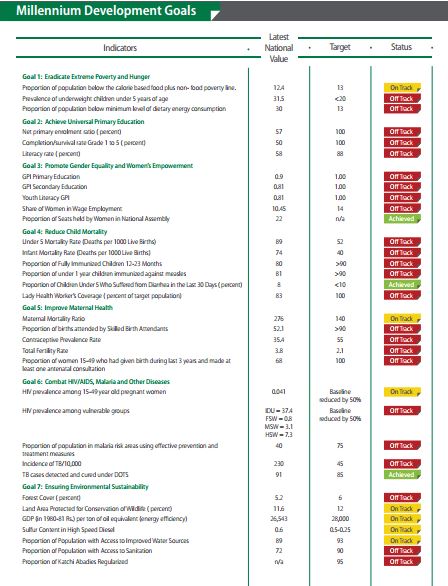 In this age of creativity and knowledge, where a country’s human resource is the main driver of progress, 14% of the Pakistani children suffer from acute malnutrition, and around 32% suffer from malnutrition related stunting which ultimately affects their learning capabilities. The MDG scorecard indicated that Pakistan has not justify any of these indicators in terms of achieving universal primary education, and is way off the track, which a wakeup call and a moment of sobering introspection of where Pakistan is globally.

Pakistan has a great emergency. There is a need to invest in its human resource, and in turn the quality of life of the Pakistani people to catch up with the world. Without investing in the people, Pakistan may lose its chance of becoming a developed country. In any country, which has a development outlook, there cannot be a bigger bad news than this MDGs report.

One eminent challenge that emerged indicated that Pakistan has not owned its Millennium Development Goals. There is therefore a need for it to be looked at in a national level as National Development Goals as referred to by Prof. Ahsan Iqbal and truly believing that attaining these goals would bring us to the level of aspiration to become a developed country.

Development in Pakistan has traditionally been centered on infrastructure building. What is needed however is a new platform of social intervention structure focused on governance aspect of social protection, making it functional, and make it deliver; which unfortunately could not materialize. Despite staggering growth rates in early 2000, those growths did not result in social protection due to governance lapse. Additionally, floods and national disasters have also had a negative impact. Even when Pakistan had a very high growth rate, it still failed to make internal progress. It demonstrated the misconception and misinterpretation of development, which was flawed. What seemed to be growth and development at that time, did not translate into any development dividend for the people, the poor and the under-privileged in the country. Thus essentially Pakistan remains a developing country.

That is what we need to take a new look at our development strategy. This is hence why the Government of Pakistan is looking into the 2020 vision where they want to put human and social capital at the center of development debate and development agenda. Nations do not become developed by building huge physical infrastructures projects alone, substantive growth demands investment in the people. And that is precisely call of the hour in Pakistan.