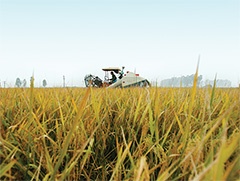 “Central to post-2015 development agenda discussions is the goal of eliminating extreme poverty by 2030. Though ambitious and laudable, this goal is not enough. With one in eight people suffering from hunger today, and nearly 2 billion affected by hidden hunger (micronutrient deficiencies), IFPRI’s 2013 Global Food Policy Report suggests that it is equally important to eliminate hunger and undernutrition— and that it can be done by 2025.  The Report examines major food policy issues, developments, and decisions, including:

This message is from: