You are here: Home / Global Health / CSOs contribution to universal health coverage into the Post-2015 agenda 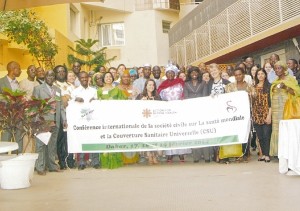 There have been numerous congregations and declarations since then as the global momentum has picked up. Salient efforts to achieve this goal have been put in place by international development institutions, particularly the World Health Organization and the World Bank. The two leading advocates for UHC released a joint framework for monitoring progress towards universal health coverage with two specific features, first being financial protection and the other being service delivery.

The existing Millennium Development Goals (MDGs) had many merits. They provided a point of convergence for different actors in country environments, and fostered a policy consistency – an essential element in countries where government vacillation exists and policy stances are frequently changed.

The MDG’s however do not focus on universal health coverage. Non-communicable disease burden, which affects millions, was also neglected by the MDGs. The country-specific weaknesses were not featured, and neither was accountability. Necessary steps towards achieving the goals, explicit mechanisms for quantum progress and transparency in policy were not emphasized, all of which feature highly on the CSOs and academia agenda.

The voice of Civil Society Organizations (CSOs) in this has been compliant, but strong. They are active advocates for change and the bridge between policy-makers and the people. In this respect, the European Network, Action for Global Health (AfGH), led by Plan UK and the NGO platform in Western and Central Africa (REPAOC) hosted a thematic consultation, the CSO conference on Global Health and Universal Health Coverage in Dakar, Senegal 17-19 February, 2014 which concluded with a joint declaration with inputs solicited from participants from 23 countries including myself where we shared our specific country experience in view of the World Bank / World Health Organization monitoring report.

Universal health coverage’s universality depends also on marked improvements in protecting people from catastrophic health expenditures that people face in developed and developing countries alike. There is a need to highlight the salience of this missed agenda. Heartfile, in line with this, will be launching its ‘End Medical Poverty’ campaign on April 7th to capture the devastation catastrophic health expenditure leaves on the medically impoverished families of the suffering patients. Many other CSOs are involved in similar activities. They need to be heard and need to become active stakeholders in the post-2015 objectives’ decision-making process as the time is right.