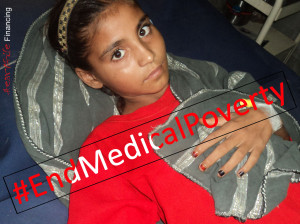 ears welled up in the eyes of Sidra’s father as he spoke about the illness of his 10 year-old daughter and his inability to meet the cost of her treatment. Lean, pale and restless, Sidra tossed and turned in pain on the hospital bed.  She seemed extremely undernourished and  deprived of all life’s amenities.  She seemed to have inherited the poverty, disease and despair of her parents. Her father and a distant relative seemed almost equally unwell and malnourished.

Sidra seemed lost in another world, and sad just like her parents. Her life revolved around the grim reality of the shanty slums where she lived with her nine family members whom her father referred to as  ‘nightmares.’  Slums were the only reality known to them; their only home where they would spend their entire lives.  “For our family,” the father added, “life is worse than death. We barely survive and are deprived of a dignified life. Even for a basic necessity like water, we have to go to a distant well.” They belonged to the most disadvantaged groups in the country, living in a deprived area with poor infrastructure, lack of clean water and absence of sanitation facilities.

Sidra was suffering from pneumonia, which developed into a painful complication called Empyema, an infection of the lungs. She had a sudden seizure with acute pain in the left side of the chest. She seemed very ill, and rapidly lost weight, continuing to emaciate.  Emaciation is often rapid and extreme in children suffering from Empyema. It is aggravated by starvation and malnutrition, putting children belonging to poor families at a greater risk of emaciation.  The parents could not afford treatment from a private hospital and so Sidra was brought to Lady Reading Hospital and admitted immediately after several medical tests and X-ray.  Heartfile was requested for an amount of  Rs. 31,518 to finance Sidra’s decortication. Without this support, it would have been impossible for the family to cover even part of the total cost of her treatment.

Sidra belonged to a poor, illiterate family living in a basic, rented accommodation in a slum area in the outskirts of Peshawar. Her father was a manual labourer earning a daily wage, while her younger brother aged seven years, visited the urban outskirts to scavenge in order to supplement the household income.  During the time when her father was attending to Sidra at the hospital, the brother’s daily earnings of Rs. 80 were the family’s only source of income. Long durations of scavenging through garbage exposed Sidra’s brother to unhygienic conditions and health risks including respiratory and skin diseases, as well as abuse and exploitation.

Child labour is a major socio-economic problem in Pakistan: here was a young child roaming amidst piles of garbage and climbing into waste bins, being exploited and paid a pittance. His was a childhood ruined by the family’s desperate need for money. Pakistan is a signatory to the ILO’s Worst Forms of Child Labour Convention (No.182). It ratified the Convention in 1960 but the country’s institutions have failed to comply with it, just like they have failed to comply with many other international conventions.

The family faced the trials and tribulations of life, endured the problems associated with looking after a sick child, and experienced the pain of having to send the other child out to forage for scraps. Sidra’s father termed the sudden illness of his child “a frightening experience for the family.” The economic and social impact of poverty and illness is far-reaching. Eradicating child labour, in spite of poverty, demands courage and societal goodwill.