You are here: Home / Guest Bloggers / Improving the Health of People and Planet, One Bite at a Time 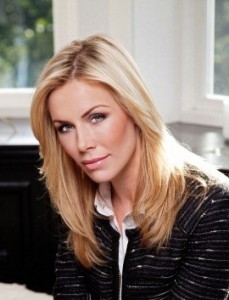 What we put on our plates is key to solving some of today´s greatest health and environmental challenges.
When I grew up in the early ’80s, my mother, a medical doctor, was an activist in a worldwide movement called International Physicians for the Prevention of Nuclear Wars. In those days, nuclear weapons were the biggest threat to humanity.
I followed in her footsteps and became a medical doctor myself. But as it has become increasingly clearer that anthropogenic climate change poses one of the biggest threats to global health in this century, I have spent the better part of the past decade working with various NGO’s lobbying for more ambitious climate policies and renewable energy. Experiencing the challenges in communicating the urgency of the problem has been a frustrating journey. Climate change is abstract. The “inconvenient truth” — record high levels of carbon dioxide in the atmosphere and melting polar ice caps — has proven insufficient to induce behavioral change on a large scale.
Without public awareness, politicians cannot act. Jean-Claude Juncker, the Prime Minister of Luxembourg, said it best: “We all know what to do, we just don’t know how to get re-elected once we’ve done it.”
So I have been asking myself: How do we move past the current impasse and go from climate talks to climate action? For me, palm oil provided a clue.

Healthy choices
In recent years, unsustainable palm oil was the subject of public awareness campaigns in both Sweden and Norway. In Sweden, palm oil was framed as an environmental problem; a threat to the natural habitats of endangered species such as orangutans. In Norway, palm oil was presented to the public as a combined health and environmental threat, not only causing deforestation and loss of biodiversity, but also as representing a hidden source of saturated fats harmful to the health of consumers.
The two campaigns had strikingly different effects. While the harmful effects of palm oil received scant attention in Sweden, Norwegian consumers reduced their overall consumption of palm oil by two-thirds within a few years. It turns out that for most people, personal health is a more pressing concern than the health of the planet — or the preservation of the orangutans.

Food for thought
Framing climate change as a health issue might be a powerful way of bringing about consumer action. It allows us to tap into one of the most important levers for change available to most consumers: the food we put on our plates. Some of today’s greatest global challenges — climate change and loss of biodiversity, as well as existing hunger and the increasing burden of non-communicable diseases — are strongly related to the food we eat and how we produce it.
Food production accounts for some 20 to 30 percent of anthropogenic greenhouse gas emissions and consumes 70 percent of all fresh water used by humans. Agriculture causes water pollution, deforestation, land use change and loss of biodiversity. Due to waste, 30 to 50 percent of all food produced never reaches a human stomach.
But the current global food system also causes major health problems. As economic development and urbanization shift diets toward less healthy fare, diet-related chronic diseases and obesity are on the rise, disproportionately affecting the poor.
In many low and middle-income countries, undernutrition, malnutrition and obesity now exist side by side. This double burden represents a significant barrier to economic development and equality.

Healthy sustainable diets as a common cure
With the global population increasing to more than 9 billion, we will need to produce 60 percent more food by 2050. How do we do so without bumping up against the ecological boundaries of our planet and further compromising human health and welfare?
Inevitably, more interdisciplinary research is needed to better understand the interconnections and trade-offs between food, health and sustainability while consecutively identifying diets and production methods that benefit both people and planet.
However, to transform this knowledge into practice, the food industry must invest and innovate along the food value chain, from producer to consumer. To promote business models that are both sustainable and profitable, and to ensure that healthy and sustainable diets are attractive and affordable for all, the right forms of market regulation and price mechanisms must be applied. To achieve this, we need science, business and politics working in unison.

Finally, to build market demand and enable consumers to make better food choices, we need efficient strategies to increase consumer awareness. As proven by the Norwegian palm oil campaign, framing global sustainability in terms of personal health can be an efficient vector for change. Health is a universal language everyone understands. You become what you eat — but so does the planet.

This blog post is part of a series produced by The Huffington Post and the EAT Initiative, in conjunction with the latter’s inaugural EAT Stockholm Food Forum (Stockholm, May 26-27, 2014) and it first appeared on http://www.huffingtonpost.com/gunhild-a-stordalen/improving-the-health-of-p_b_5379684.html. The EAT Stockholm Food Forum aims to convene thought leaders at the intersection of science, business and politics, to develop integrated strategies and non-linear solutions toward a healthier and more sustainable global food system. For more information about EAT Stockholm Food Forum, read here.