You are here: Home / Sania Nishtar's Desk / The public health challenge of this century 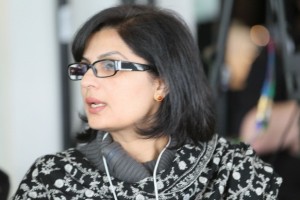 A forty-five year old man at the prime of his life in Pakistan struggles with heart disease. He has been told that three of his major coronary arteries are critically blocked. His wife, at age 43 suffers from type 2 diabetes and has recently developed complications in both eyes, which could make her loose her eyesight, in the same way her mother did in her sixties. She shudders at the thought of ending up with the same fate as her, with an amputated toe, gangrenous foot and painful dialysis for renal failure on her deathbed. The man’s father suffers from stroke, and is heavily burdened with disability, unable to walk or carry himself around without assistance. The couple gather around the dining table for the evening meal, with the father in the wheelchair. They tuck into generous helpings of trans-fat-drowned lamb curry and traditional salted bread. The mother calls out for the two sons in living room, but they have already decided to order upsized burgers, large fries and a one liter-bottle each of soda from the fast food chain store next door. They are too preoccupied with the latest computer game, which they have been at for the last four hours, not moving an inch from the couch. At age 13 and 7, they are, to put it simply, already obese.

The weight of disease hangs heavy in the room despite their attempts to act normal. The only breadwinner knows his family is doomed if he is unable tosurvive. The woman is mindful of the disability potential for the disease she now harbors in full swing. She wonders what will happen to the two boys, if she is unable to care for them. The potential complications of their diseases haunt the couple.

What the family is oblivious of, is the fact that they have played a major part in landing themselves in the conditions they suffer from. Perhaps they do not realize that the children too are being set up for a similar, if not a fate much worse than theirs.

Some of our personal choices and related contextual factors which entail adoption of an unhealthy diet, sedentariness, tobacco use, and consumption of harmful levels of alcohol constitute serious risks for a set of diseases, which are linked by the four common risk factors—heart disease, diabetes, cancers and some chronic lung conditions. Collectively, labeled as non-communicable diseases (NCDS), they are by far the leading cause of death in the world, representing 63% of all annual deaths, killing more than 36 million people each year, 80% of which are in low- and middle-income countries.

There is, however, a silver-lining to this staggering threat to health—the potential of prevention through appropriate public health action.

Millions of families around the world could be saved from outcomes such as the ones being endured by the family unnecessarily in Pakistan with effective public health interventions that tackle the four shared risk factors. Ensuring sustainable and healthy food systems at a global scale is one of the key areas of action in the wider space of global and domestic inter-sectoral public policy to tackle this rising tide. Auspiciously, these subjects will be at the heart of a science and policy sojourn in Stockholm at the EAT Forum this week.

We, as stakeholders in the space of global health have an urgent and pressing responsibility for galvanizing action to curb the public health challenge posed by the huge burden of NCDs, which has remained plagued by a paradox. While it touches the lives of billions, its scale and public health potential remains unappreciated fully by people and governments. Bridging that gap and ensuring institutionalization of effective action in global and domestic policy and systems is the challenge we must embrace for this century.

Sania Nishtar is the founder and president of the NGO thinktank, Heartfile in Pakistan. She is a former Federal Minister of the Government of Pakistan, where she held four portfolios. She has been recently appointed as Co-chair of the World Health Organization’s Ending Childhood Obesity Commission. Sania Nishtar is an Advisory Board Member of the EAT forum.