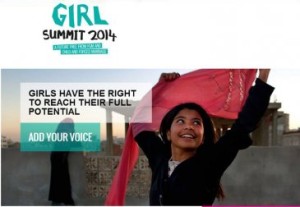 If you are not in London attending the Girl Summit this week, it doesn’t mean you can’t participate in the global movement, which the Summit envisages rallying to end child, early and forced marriage (CEFM) and female genital mutilation (FGM) for all girls within a generation. Pledge support for this through Twitter and Facebook.

The conference, which is co-hosted by the Government of United Kingdom and UNICEF commenced on July 22nd and is currently underway. Its website boldly states “Child, early and forced marriage affects millions of girls every year. One in three girls in developing countries is married by the age of 18. Some are as young as eight. Girls who marry young have babies while still children, putting them at risk of death or suffering for the rest of their lives. They are more likely to be poor and stay poor”. A report released by UNICEF prior to the Summit underscored that FGM and child marriage profoundly and permanently harm girls, denying them their right to make their own decisions and reach their full potential. The International Summit is expected to produce an ‘International Charter’ calling for the eradication of FGM and child marriage.

Already at the first day of the Summit, participants called for a global ban on FGM, which was captured in one of the headlines of the Daily Tribune here in Pakistan. The video on the homepage of the Summit is worth watching and can be accessed here.