You are here: Home / Pakistan Health / Dark cloud with a silver lining 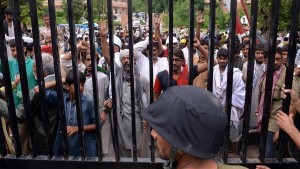 In a recent article titled “Population, not politics, threatens Pakistan”, @VJMallet, the South Asia Bureau Chief of the Financial Times discusses how the population issues of Pakistan could have dire consequences for the country. He mentions how despite the rising political tensions and debate regarding the future, population growth is one subject that seems to be off the agenda.

Pakistan’s population has risen at an unprecedented rate from 33 million since the country’s independence in 1947 to 200 million at the present day making it the 6th most populous country in the world. However, in the future the extent of growth is largely dependent on fertility rates. If the country manages to bring fertility down such as other countries have in the region, the figure in 2050 could stand at 266 million. On the other hand, if this is not the case the projection in 2050 jumps up to 320 million 2050.  This explosion will inevitably place a great strain on natural resources, services and infrastructure. Furthermore, the growing workforce is not being matched by the jobs provided in the economy.

With there being a high unmet demand for family planning services and with 43 percent of pregnancies being calculated to be unintended, it is clear that the root of the problem is not cultural or religious consideration but that there exists a clear gap in service delivery. There is a silver lining though—these figures represent an opportunity for the government to slow the growth rate and improve well being for society. Watch out for more details on this issue from Heartfile. We are in the final stages of preparing a documentary on the subject, which is scheduled to be released in November.