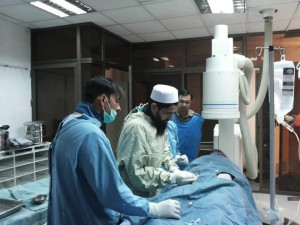 Just days before the horrific shooting at a school in Peshawar, Pakistan last December that killed at least 145 people (most of them children), two 40-foot ocean freight containers of medical supplies were delivered to Lady Reading Hospital. The hospital would soon become the site where most of the people injured were rushed to receive emergency care.

This delivery was the first donation shipped as part of the Clinton Global Initiative (CGI) Commitment to Action“Mobilizing Medical Supplies for Pakistan“ announced by Heartfile Health Financing (HHF) – a Pakistani organization dedicated to expanding health care to the nation’s underserved people.

Some wounded in the shooting were likely treated with the donated items, which included critical medicines as well as a range of disposable hospital supplies such as gloves, syringes, wound pads, bandages, and dressings, and medical equipment, including: two specifically requested pediatric gastroscopes, 30 hospital beds, 25 autoclaves, 40 wheelchairs, and 28 IV stands.

While the massive tragedy that would affect Lady Reading Hospital (LRH) was unpredictable, the hospital’s ongoing need for medical supplies was certain.

According to The Lancet, more than 78 percent of people in Pakistan pay out-of-pocket to access health care services even though more than 60 percent of the country’s population lives on less than the equivalent of $2 USD a day. As a result, burdensome spending on urgent medical care needs and impoverishing healthcare-related debt are common.

Over the next five years, Heartfile aims to strengthen the public healthcare system in Pakistan by distributing medical products adequate to treat a minimum of 2,500 patients in need. Direct Relief has committed to providing $5 million worth of medical goods to Heartfile over the program period.

This commitment is conducted in partnership with the World Health Organization (WHO) Pakistan office and Pakistani nonprofit Sulaimaniyah Trust. Direct Relief medical donations are shipped to Heartfile, which then distributes them to an approved network of public sector hospitals based on their specific needs.