On January 23, 2000, Heartfile launched a public awareness campaign in collaboration with ‘Jang,’ a prestigious national Urdu daily accessed and read every day by an estimated 8 million people in the rural and urban areas of Pakistan.This campaign involved the publication of a weekly article on heart disease prevention on the ‘Sehat’ (Health) page of the Sunday Jang magazine, which was considered the most appropriate section for such features in view of its wide readership. The campaign was launched in January 2003 with an introductory article along with the first public service message.The articles featured were a translated version of English articles, with appropriate editing and language changes. Changes in the articles also took into account, the cultural differences between readers of Urdu and English newspapers. Each article was accompanied by a coloured version of the Heartfile mascot in the national dress and the logo lettering in red.

As many as 127 articles were published as part of the Jang-Heartfile campaign, which concluded on April 22, 2007. 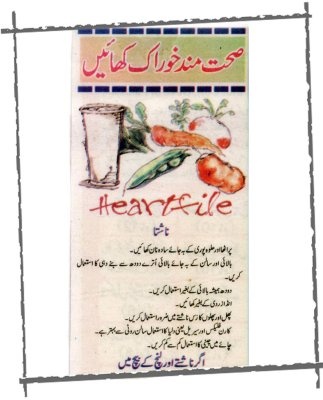